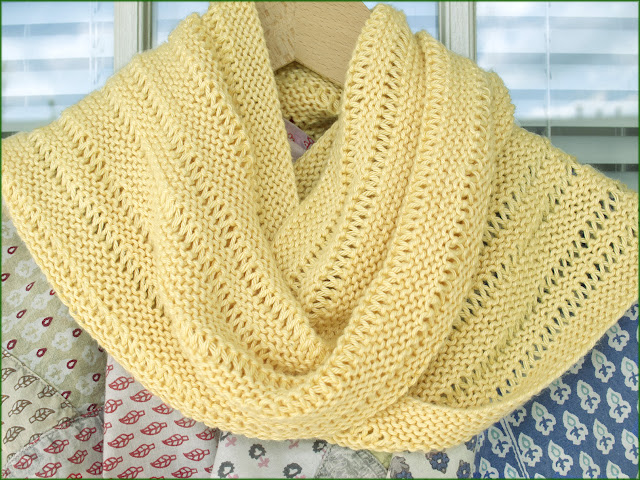 You know how it is at this time of year — one minute it's warm and the next you find yourself looking for an extra layer which you can quickly throw on. This is where this new scarf, the Kimpton Scarf and Wrap, fits right in. It is lightweight and lacy, yet really provides some much-needed warmth when the evenings start to chill down.

The pattern takes its name from an English village, Kimpton in Hertfordshire. I was sitting on a large fallen log by the side of a footpath and gazing across the rapeseed fields to Kimpton Church when I was finishing this off. Have a look at my previous blogpost for some photos of the fields in the area in full bloom. 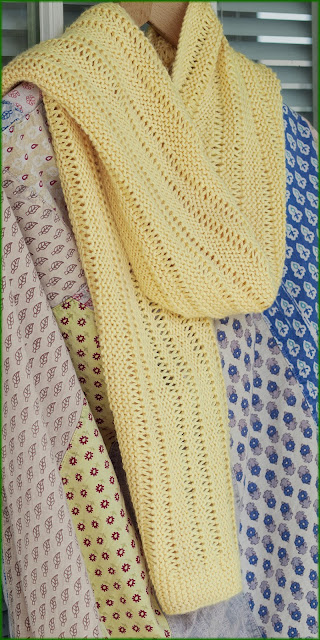 The scarf is worked in a completely reversible stitch which is so important for an item such as this. When you are putting a scarf on, then taking it off again, then reaching for it once more, you really need a reversible pattern. The last thing you want to do is have to worry about which is the "right side" or the "wrong side". Just grab it, wrap it and feel warmer!

The Kimpton Scarf is worked lengthwise which allows the stitch to be shown to its best advantage. The result is simple yet sophisticated.

I worked the sample here in Knit Picks "Shine" sport yarn, which is 60% cotton and 40% Modal, a natural Beech wood fibre. The resulting yarn is silky and soft to wear. It really shows up the stitch definition well and drapes beautifully. I posted some photos of this yarn in an earlier blogpost "Sunshine and Daffodils". 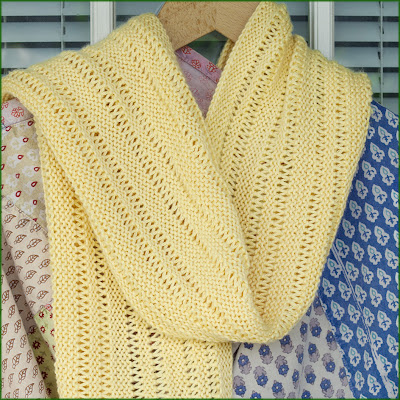 The Kimpton Scarf and Wrap is an easy pattern to knit and would be perfect to work on during day-trips in the car or a picnic at the park. Here is a project you can finish during the current season!

For more details about this pattern, please click here. 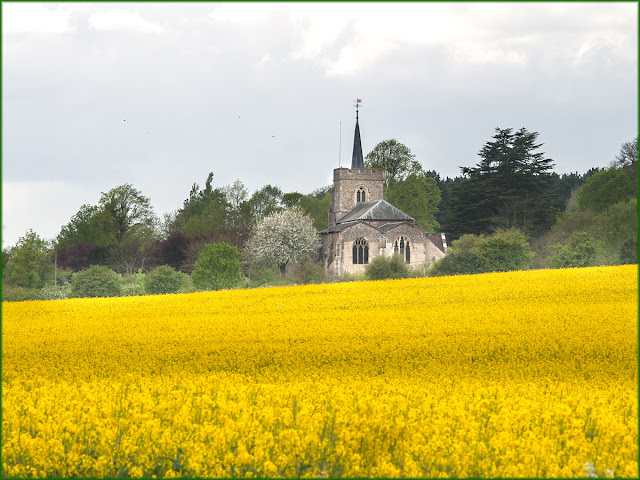 In my last post, I could be found sitting amongst a carpet of yellow and white daffodils, knitting a tension swatch for a new scarf. This week I have been finishing off that same scarf surrounded by yellow rapeseed fields!

The picture above shows Kimpton Church in Hertfordshire, nestled in an absolute swathe of yellow flowers. The countryside around Kimpton is always beautiful, but it was especially so on that day, and the heady aroma filled the air as we walked around.

Kimpton itself is a small, pretty village which throws its doors open to the public at the beginning of May for MayFest. The church is bedecked with paintings in a well-attended art exhibition and there are lots of other events too. We enjoyed the traditional maypole dancing on the village green the last time we attended. And of course the cream teas are always welcome on a warm day. It's well worth a visit if you're in the area.

In my childhood, there were often yellow fields but then it was usually where farmers were growing mustard. Now that has been largely replaced by rapeseed. However, both are equally stunning, especially when you are up high and can see the fields in the distance.

In the photo above, we were driving across to Cambridgeshire and the thin yellow band is a field of rapeseed just appearing over the brow of a hill.

Now the yellow scarf I was working on in my last post is pinned out on a blocking board and I will be posting more about this next time.

Thanks to my DH, Tim, for the great photos. If you'd like to see more of his work, please visit his Flickr site.

Last Blogpost: Sunshine and Daffodils
Next Up: Kimpton Scarf 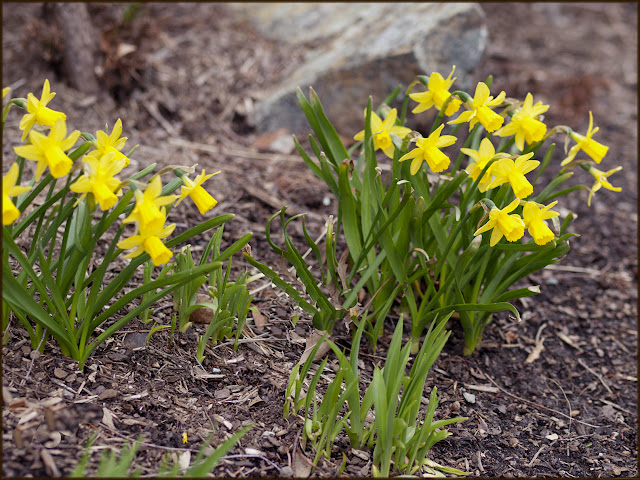 Spring is such an amazing time of the year, isn't it. About 10 days ago the cars and roofs around here were under several inches of snow after an intense storm blew through. Then just 3 days later, on April 1st no less, it was so warm that everyone was walking around in T-shirts!

I took the opportunity of the warm day to have a walk too and I spotted this little clump of narcissi in a sunny, sheltered spot. They reminded me of the ones we used to have in our garden when I was a child. These had originally come from my grandparents' house in South Wales where they grew in profusion by the back wall.

These tiny perfect flowers would come up every year at the end of February, and on March 1st (St David's Day — the patron saint of Wales) we would all go to school with one or two of them in our buttonholes.

Now just one week later than the photo above, all the main daffodil varieties are in full bloom and everywhere is a carpet of yellow and white. 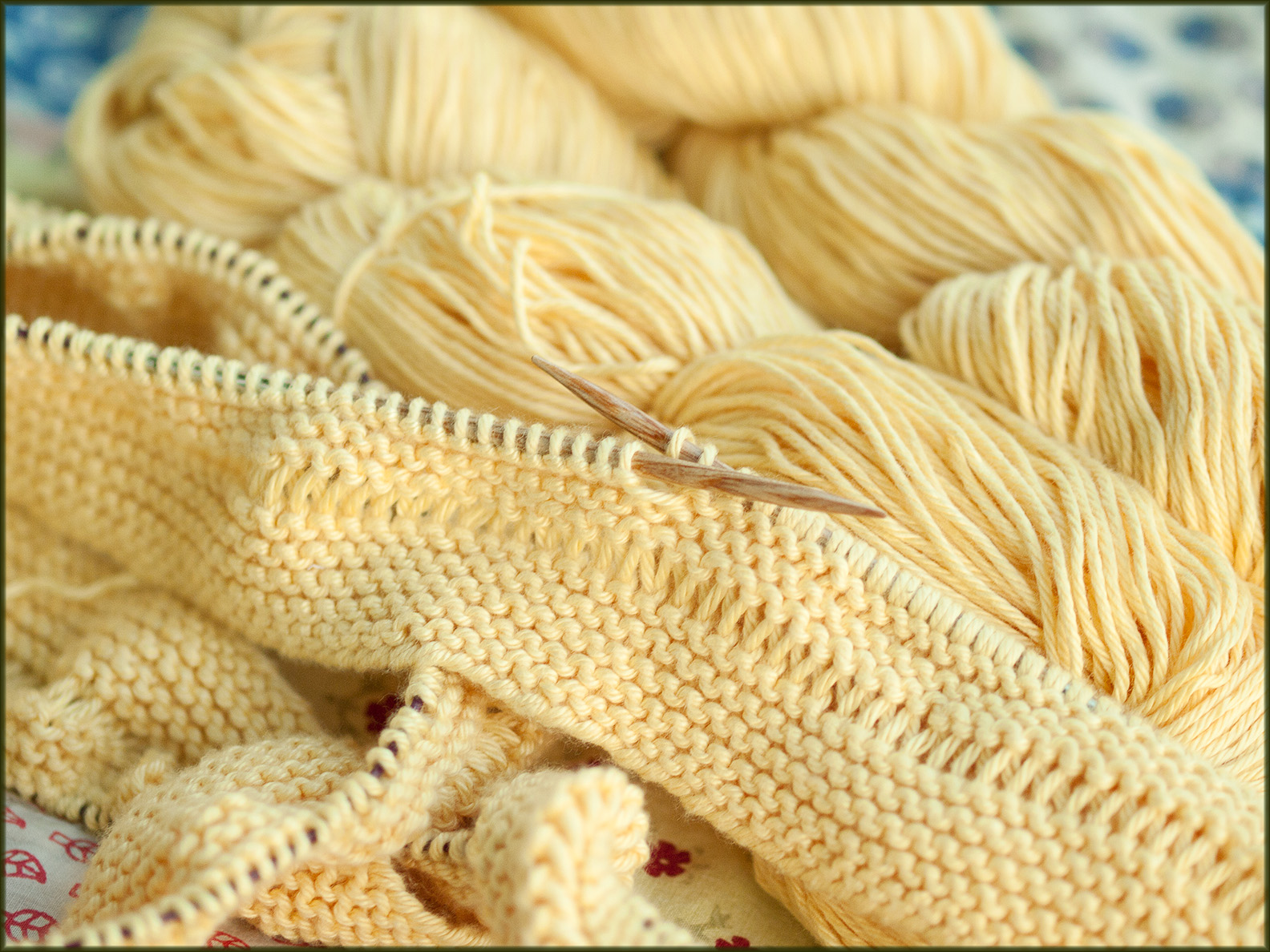 I love having several knitting and spinning projects on the go at the same time and they often involve quite large items such as this one here. However, I also enjoy smaller and less challenging items which work up rapidly and can be used in the current season!

So I was especially pleased when I found a lovely cotton mix yarn in just these Spring-time yellow shades and it has been washing and drying over the last few days. This is Knit Picks "Shine" Sport yarn, and it is absolutely beautiful. I am going to sit out on the porch now with a cup of tea to hand, the scent of the flowers in the air and try out some stitch patterns.

Last Blogpost: It's good to have options - the Beckenham Scarf v2.0
Next Up: The yellow theme continues.