The village of Chalfont St Giles

Some years ago we lived in a small village in Buckinghamshire with distant views across waving fields of wheat. It was wonderful to sit on the deck at the end of the day and watch the sun go down behind the large manor house on the far hillside.

Well, that and the London express trains on the nearby railway line! Yes, it wasn't completely the rural idyll that you might read about in a story-book, but it was beautiful none the less.

It was an interesting area to live in, with a yarn store only a few miles away (let's get our priorities right about local attractions shall we), a network of canals nearby and rolling countryside courtesy of the Chiltern Hills.

One of our favourite Sunday pastimes would be to drive through the Chilterns and then walk for a few miles, ending up at a scenic pub for lunch. One such excursion took us to a delightful village called Chalfont St Giles, complete with a duck pond right in the centre.

This is an old village and was mentioned in the Domesday Book of 1068. The Feathers pub there was established in about 1580 and there are many wisteria-clad cottages dating from the 16th and 17th century. 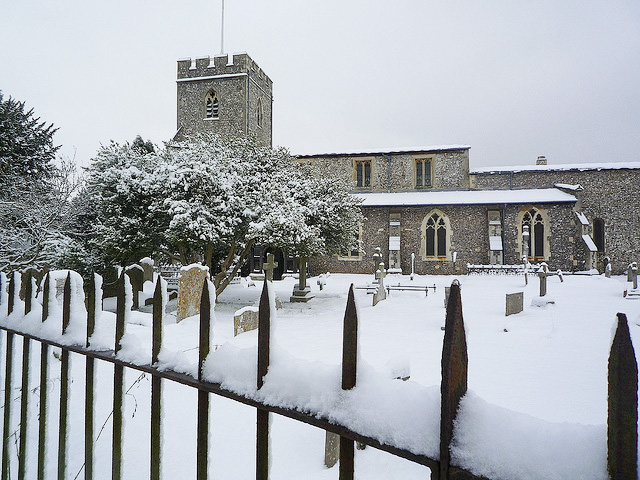 The church in Chalfont St Giles is Norman with a large square tower and an old wooden lychgate. It also has some wonderful mediaeval wall paintings and wood carvings inside. 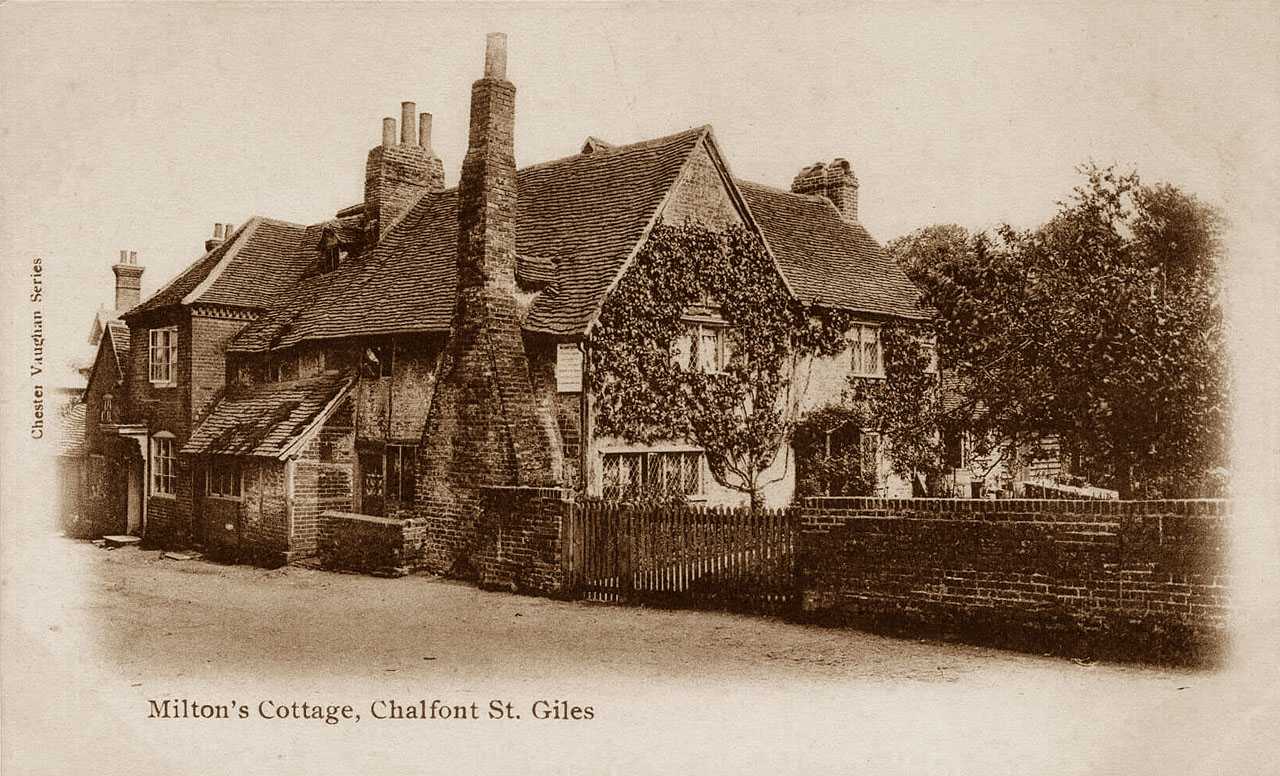 John Milton retired here in 1665 and his house is now open to the public. It is said that he completed his epic poem "Paradise Lost" in this cottage.

Another local celebrity is William Penn who was buried in a Quaker cemetery nearby after his return to the UK from the colonies, as they then were. There is a town called Chalfont in Pennsylvania named after Chalfont St Giles and by co-incidence, we ended up living close to that town when we moved to the USA.

There are several other places with the "Chalfont" name in the area, including the old village of Chalfont St Peter and the newer town of Little Chalfont, which arose with the coming of the railways. 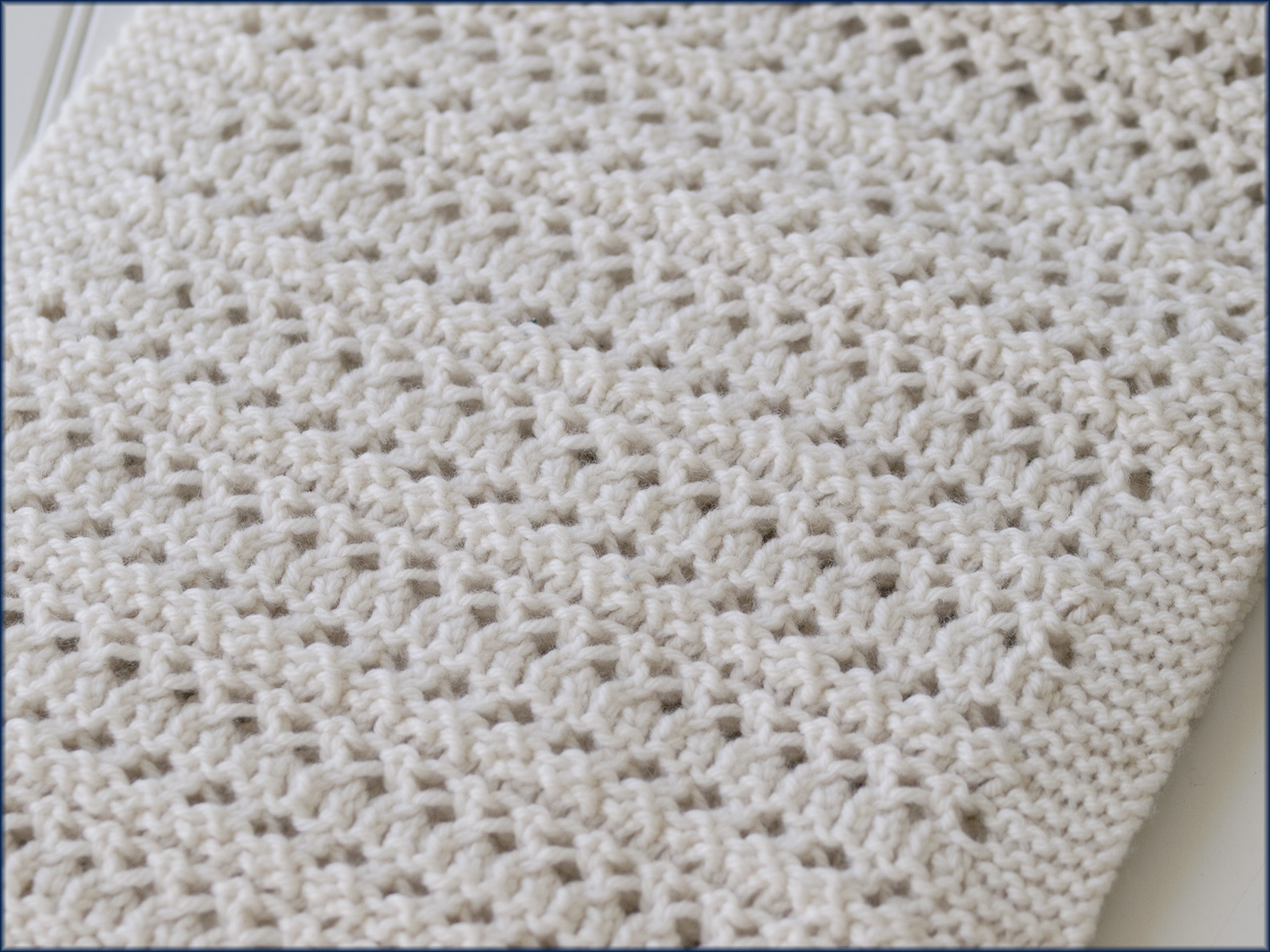 We visited the area around the Chalfonts a number of times and always enjoyed walking in the hills in all seasons – surrounded by the colourful shades of autumn, or walking in our wellingtons through the dusty snows of winter. The following year we could stand, leaning on a fence rail, and watch the spring lambs in the chalky fields. So it seemed a natural choice of name for the Chalfont Scarf that I wrote about in my last blogpost. This is a real three-season scarf — just right for country walks and gentle meanderings.

Last Blogpost: Chalfont Scarf
Next  Up: Small is beautiful 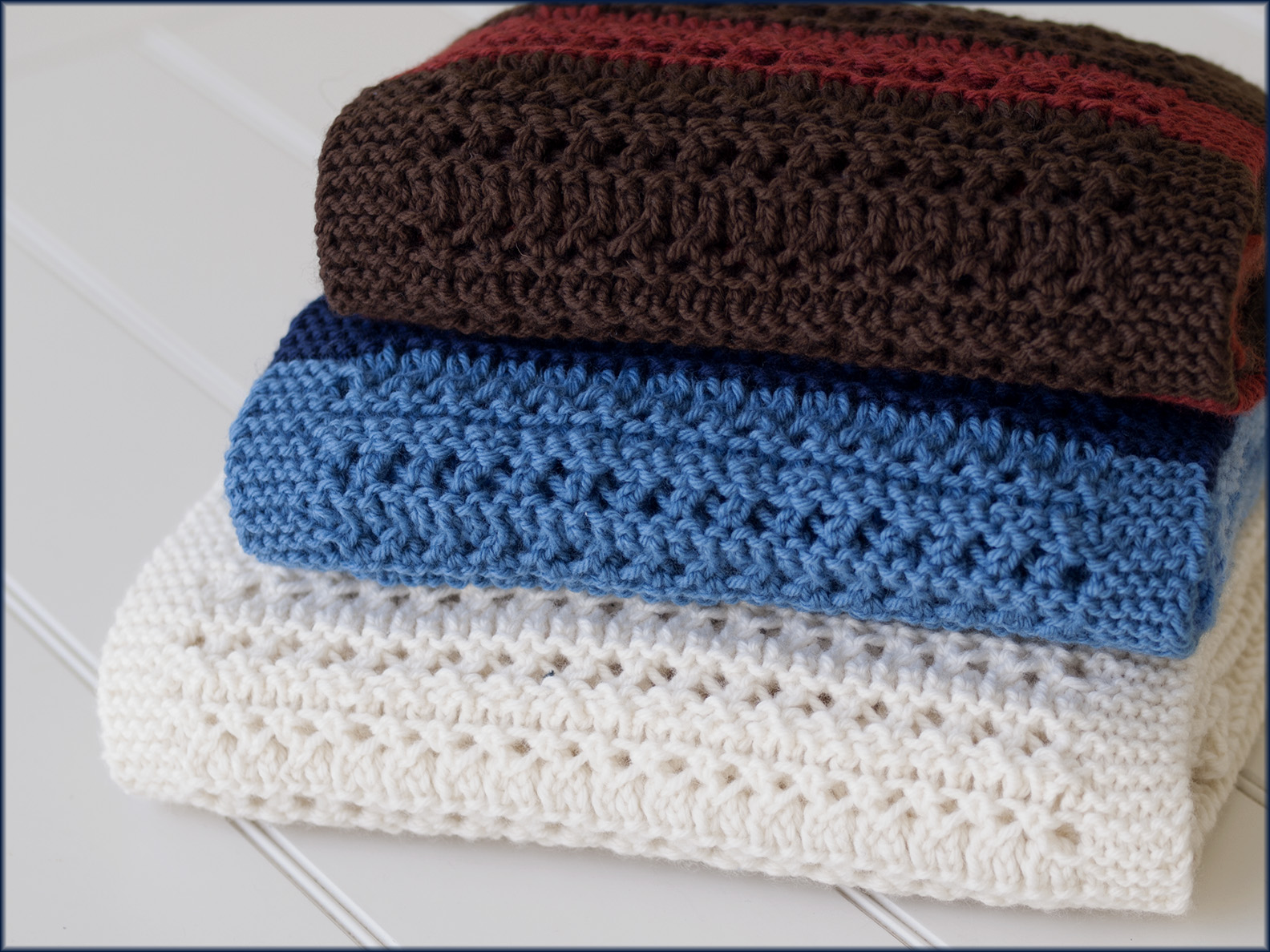 The news is full of stories about yet another blizzard in Massachusetts this weekend. There has been so much snow this winter! Yet we can all see the calendar and realize that it really is only a few weeks until Spring arrives.

So now's the time to plan for some Spring-time knitting: stay indoors in front of a cozy fire today and knit a lovely scarf which will be useful for the sunnier days ahead.

Time to introduce the Chalfont Scarf. This is a real three-season scarf which can be worn right the way from the autumn-time through the depths of winter and into the cool of a spring evening. 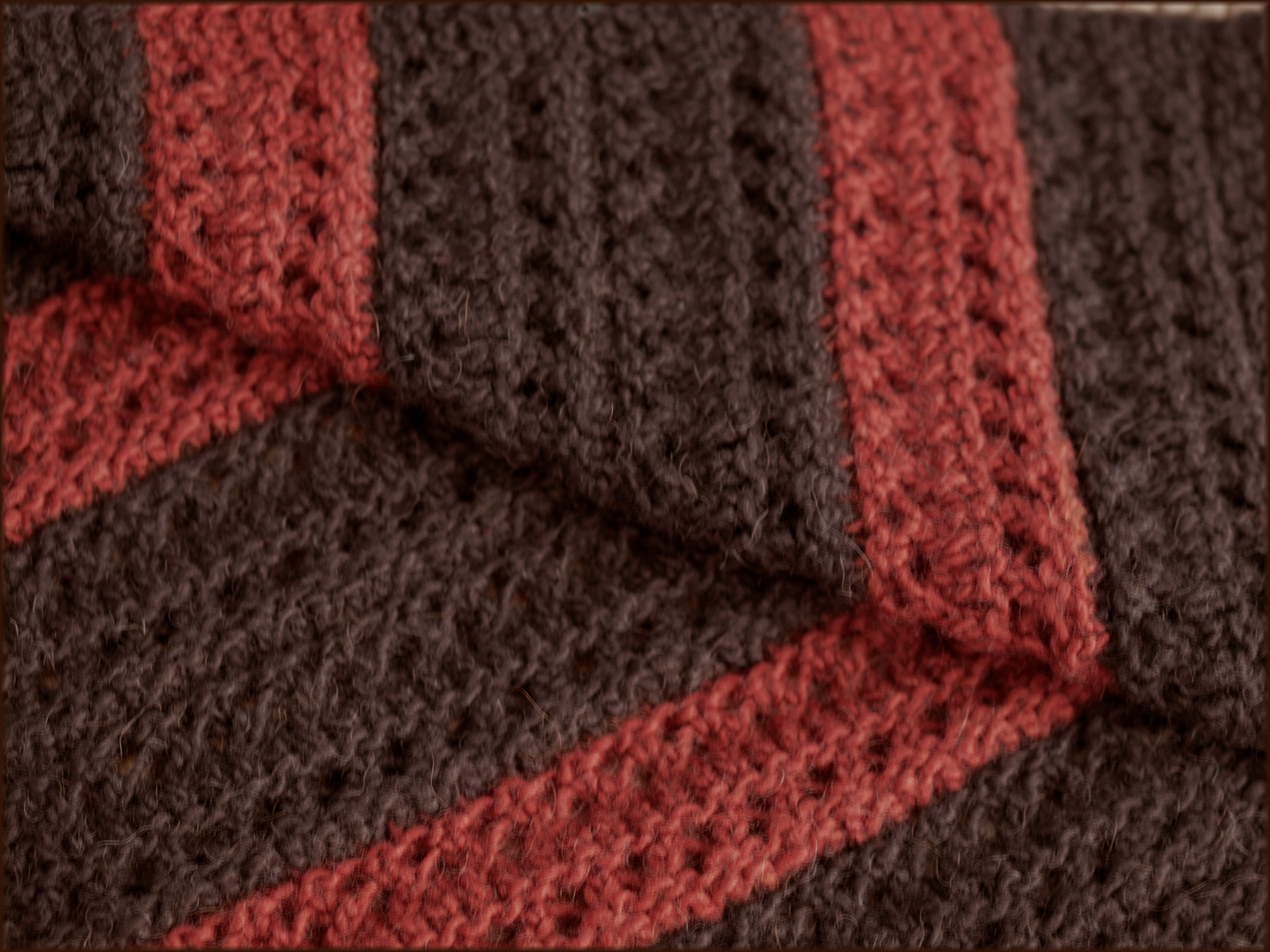 The photo above shows one great feature of this pattern – the scarf is completely reversible even when worked in two colours! No bi-colour purl bumps when you turn the scarf to the wrong side. There are so few lace patterns which can be worked with more than one colour, so this is a real bonus.

The stitch pattern is called Roman Stripe Lace and is taken from our book, Reversible Knitting Stitches. I wrote about this stitch in a previous blogpost, Reversible Stripes, so have a look there too for more details about this great stitch. 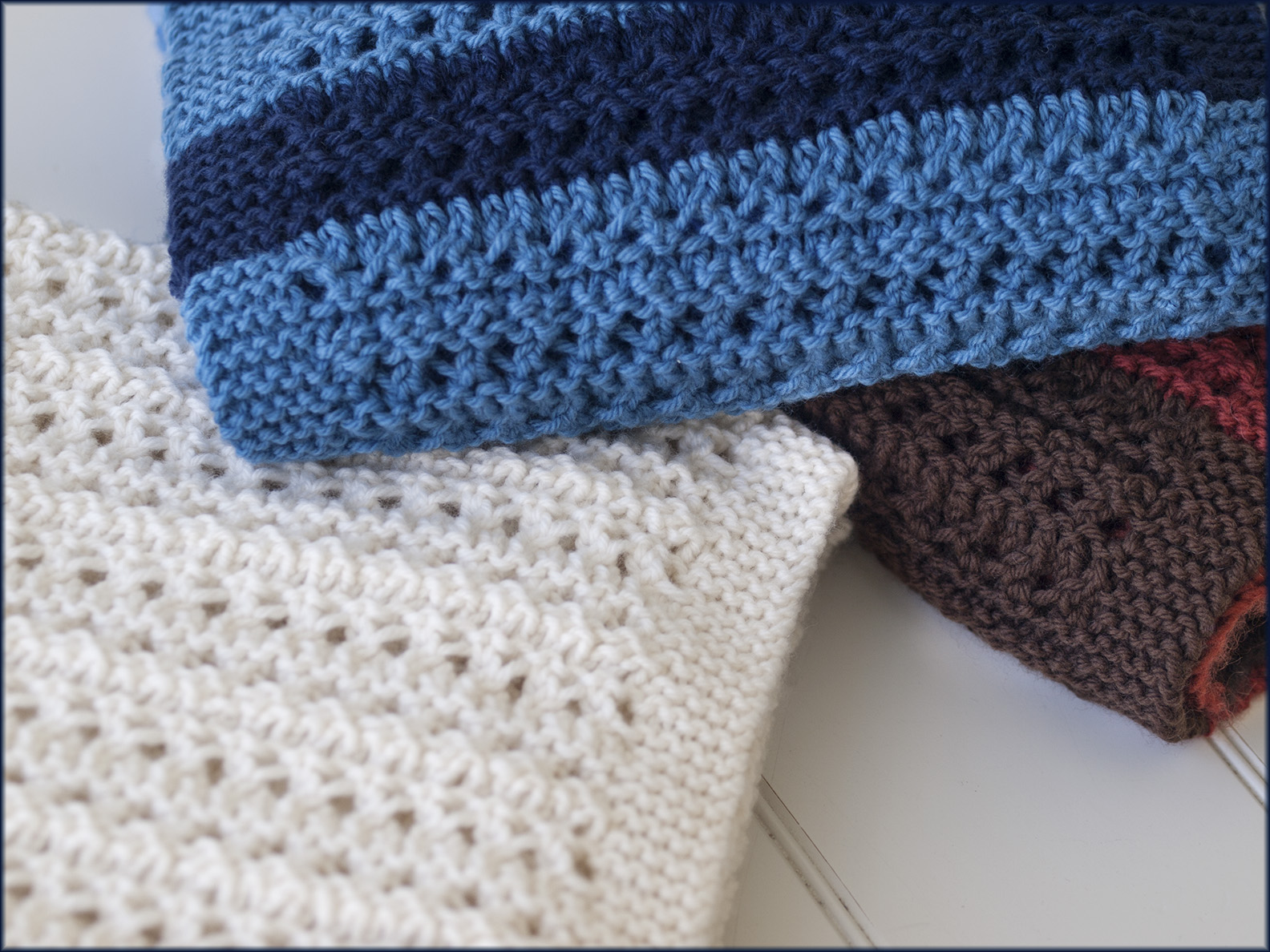 The Chalfont Scarf pattern includes three different sizes so you can tailor the scarf to your own requirements. The widest of these makes a lovely cozy scarf which is perfect for wrapping around your neck to really keep the winter chills away.

There are also two narrower scarves which can be draped a little more openly and add a welcome transitional layer for the spring or autumn. 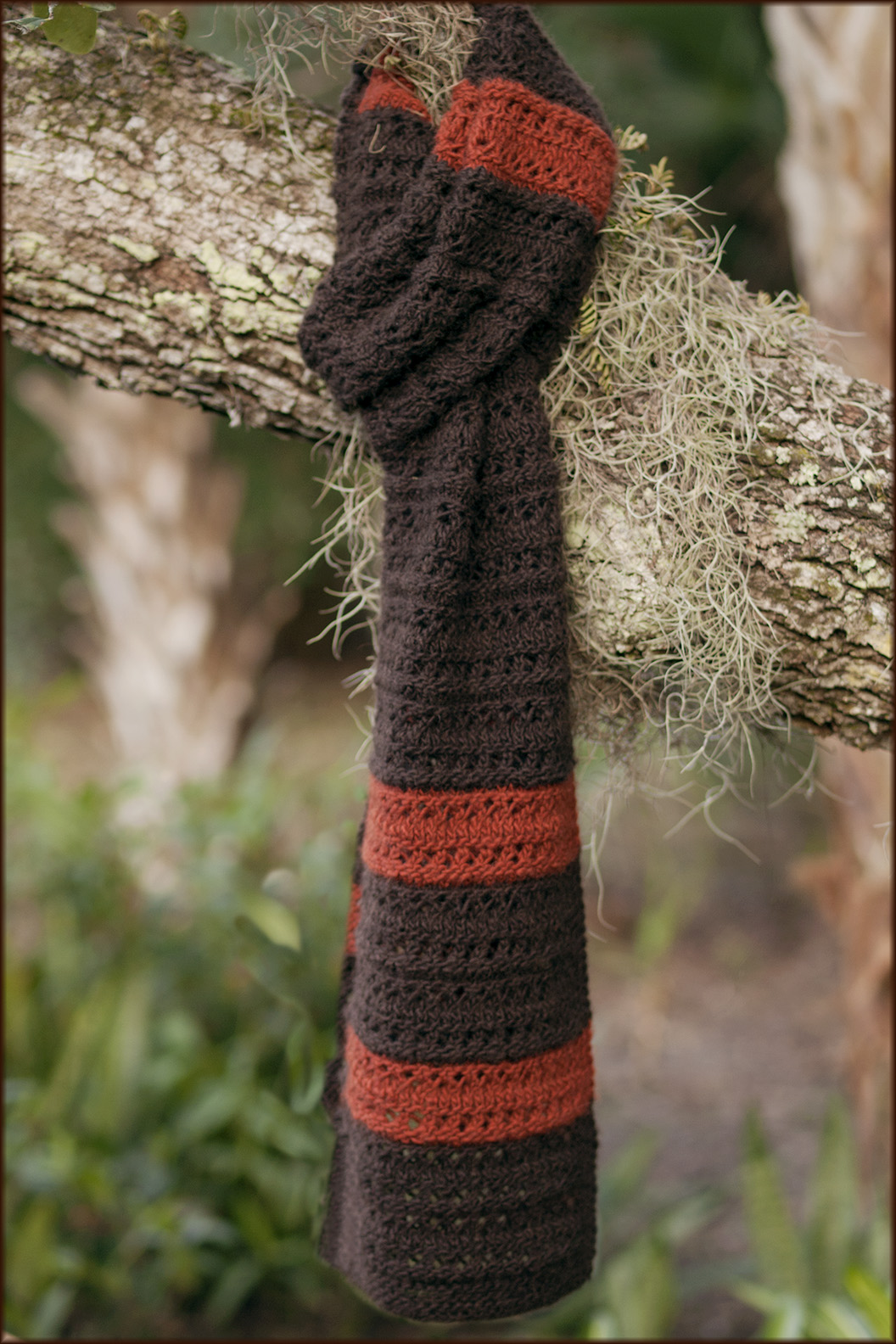 I have included three different colourways: a solid colour in a soft white which is just perfect for the winter, plus two striped colourways – a two-tone blue and a wonderfully earthy dark brown and russet combination.

The scarves are worked in Valley Yarns Amherst, which is a favourite yarn of mine. It is made from soft merino wool and comes in a good range of colours.

For more details about the Chalfont Scarf, please click here.