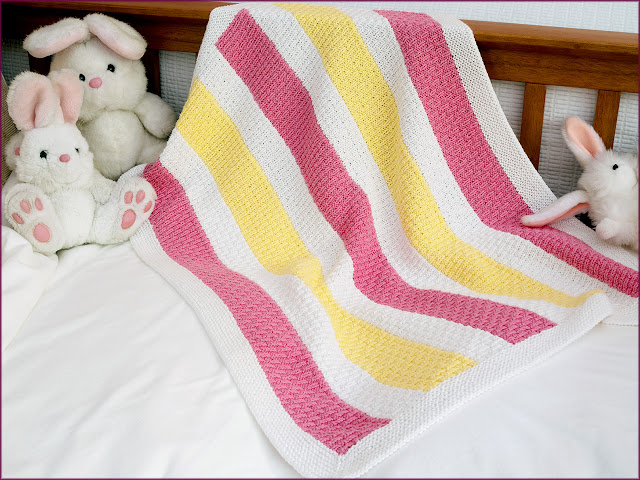 Next year looks set to be a colourful one for the little folk, and if the forecasters are right then we will be seeing stripes and pops of colour on all children's items: summer dresses with layers of brightly contrasting shades and paint-box splashes of colour on little shirts and nursery items.

So here's a new baby blanket pattern that is right on trend. This is the Liliwen Baby Blanket and it is worked in a wonderfully soft cotton yarn, Rico Creative Cotton DK. I love this yarn — it is easy to work with and the colours are bright and cheery. It is also a perfect weight for the warmer seasons, when babies just need a little extra layer to keep them warm.

The blanket features bright candy stripes of pink and yellow which would be a lovely choice for a little girl. However, the yarn comes in a wide range of colours and a royal blue / aqua combination would be great for a little boy. 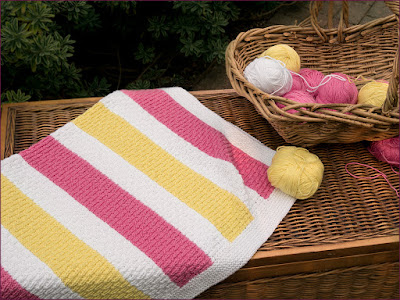 The Liliwen Blanket is worked in Bamboo Rib, an easy reversible stitch from our book, Reversible Knitting Stitches. The pattern has strong, vertical patterning like stalks of bamboo and the blanket grows quickly. 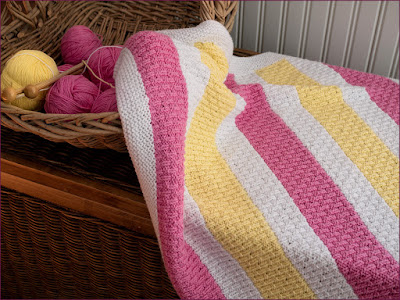 The pattern includes three sizes so you can make a small blanket for baby's first Moses Basket / Bassinet or either of the two larger sizes as they grow into their next sizes of bed.

For more details about this new pattern, please see my website.

Until next time, Happy baby knitting!

Last Blogpost: The future looks bright
Next Up: A hint of what's to come

If the colour forecasts are right for 2017, we are in for a treat next year! Trend boards coming from the textile shows are showing some wonderfully bright colours, reflecting a feeling of optimism in all areas of fashion. Hues are more solid, colours more intense and the brights are vibrant and bursting with life. 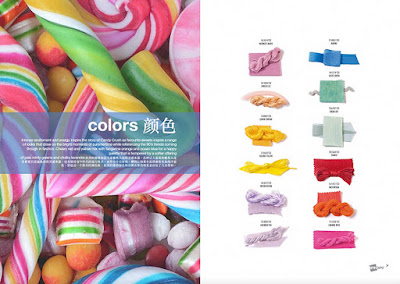 Fashion trend-spotters have been speaking about an "uplifting forecast", with a real feel-good factor. The picture above shows one palette forecast with intense brights reflecting a "renewed appeal and optimism" as fantasy comes to the fore-front of fashion.

The trend pages fairly breathe excitement and energy. Colours inspired by candy canes and the bright moments of summertime bring pinks and yellows together with tangerine orange and ocean blue to give some stunning combinations. 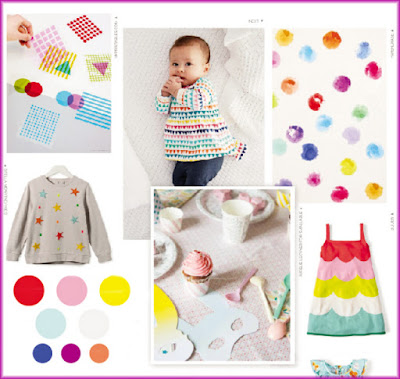 This is especially true in kiddies' items, where Spring/Summer 2017 looks set to be big, bold and bright! The forecast above is called Portobello Belle from Emily Kiddy, who posts wonderful colour forecasting ideas for the younger set.

We all know that babies love bright colours, so a move towards a more colourful range of items for the little ones seems a very natural choice.

In my next Blogpost, I will be posting details about the new Liliwen Baby Blanket pattern, so if you think there will be the patter of tiny feet somewhere near you next year then this would be a great choice of item to make ahead of time.

Until then — Happy Knitting! 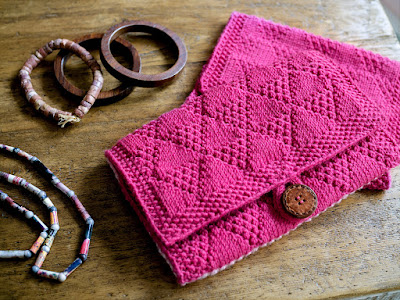 This is the year for bringing your love of pink to the fore. With Pantone announcing that Rose Quartz is 2016's colour of the year, finally, pink is not just for the little ones. 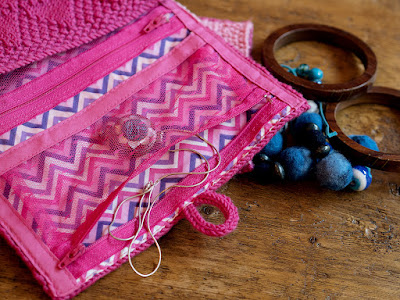 So celebrate your girly side with a new two-tone jewellery roll. The Wrendale Jewellery Roll has a wonderfully textural pattern which is then gently quilted to enhance the pattern further. 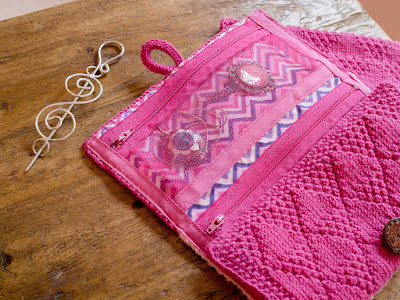 Inside, three zipped pockets keep your bangles and bracelets safe and your necklaces tangle free. The mesh pockets enable you to easily select the item you are searching for and the whole roll is closed with an i-Cord loop over an antique button detail.

Make one for yourself and a 2nd for your travelling companion! 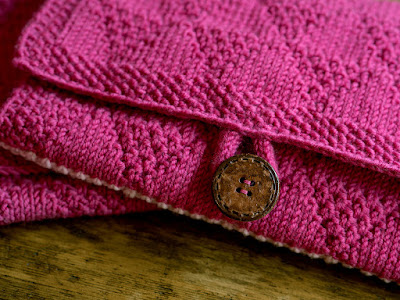 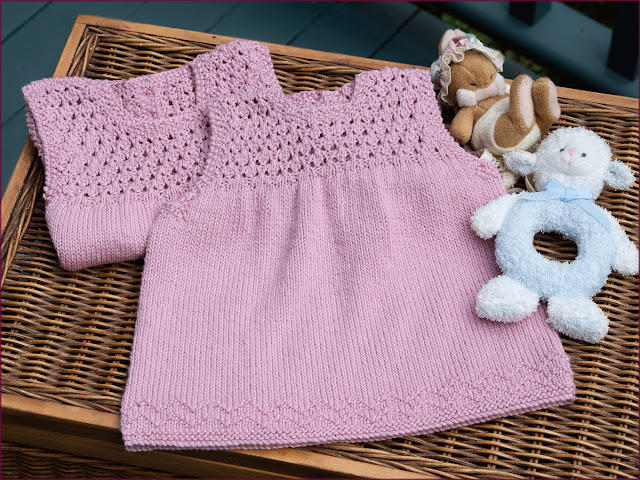 There no two ways about it - little girls just look pretty in pink. It's lovely to see them in other colours too, of course, but pink just makes every baby girl look her very best. And this year, it is the height of fashion — even "grown up" girls are sporting this colour!

So here is a baby dress that will make your little one look cute as a button. 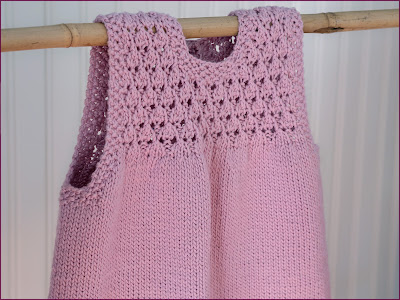 This is the Aelwen Baby Dress which features a patterned hem and a soft flowing skirt gathered into a beautiful lace yoke. The yoke is worked in the Blackberry Lace stitch pattern from our book, Reversible Knitting Stitches. This is a pretty stitch which holds its shape very well, giving a light delicate patterning.

The dress is worked in a soft, draping cotton mix yarn which feels cool and fresh so can be worn right next to the skin or over a light-weight top.

The yarn is Knit Picks "Shine" Sport, which I used in the Kimpton Scarf. I love this yarn, because it is soft and drapey with a lovely 60:40 blend of cotton and Beechwood rayon. It feels cool and silky to the touch — just perfect for these high summer temperatures we have right now. 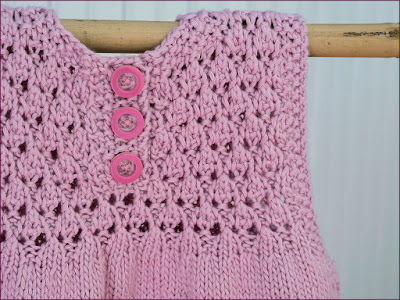 The dress has large buttons at the back so is easy to put on and off even the most wriggly of juniors. The pattern is worked seamlessly so there is very little finishing to do after the knitting is complete and there are four different sizes, ranging from 3 months to 2 years of age.

Make several in different colours and prepare for your little one to be coo’ed over!

Last Blogpost: In the pink 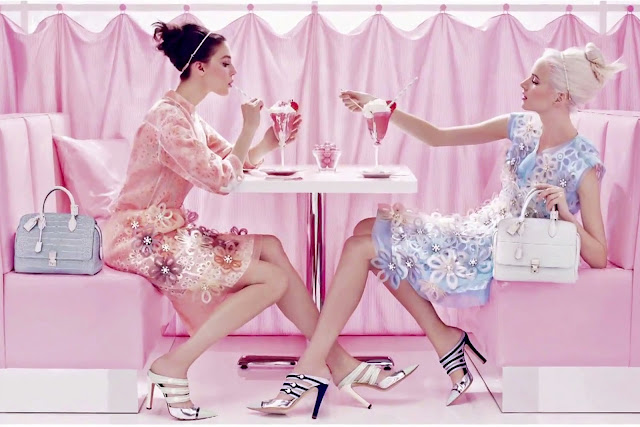 Have you seen how much pink is coming into the stores for the autumn and winter months? It seems to be everywhere. And there's a good reason for that, because pink is the Pantone Colour of the Year. Well, that and blue (as we saw in my last colour blogpost). 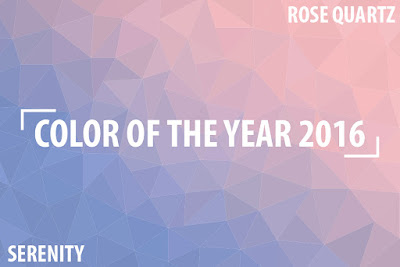 Yes, for the first time ever, Pantone has chosen not one but two colours for the accolade of Colour of the Year — a soft pink called "Rose Quartz" and a blue called "Serenity". The cool blue tones have been predominating for the Spring and Summer, but now Summer is at its height and Autumn is on the horizon, rosy shades of pink are coming to the fore.

Pantone says that the mixture of the two brings a sense of harmony — a softer take on colour as an antidote to the stresses of modern-day living. The two colours have a balance between them, the tranquil blue shades conveying an impression of connection and peace while the rose quartz brings a feeling of warmth and well-being. 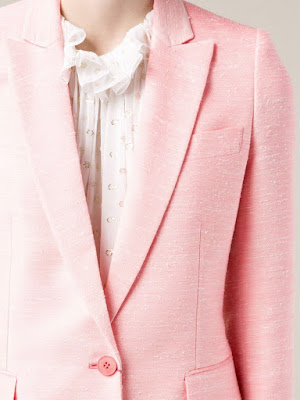 Rose pink was certainly heavily featured in the runway shows for 2016 with Armani, Stella McCartney and many others including outfits and capsule collections in this new shade. And it was extremely well-received - the Stella McCartney jacket above, for example, sold out almost as soon as it was listed. 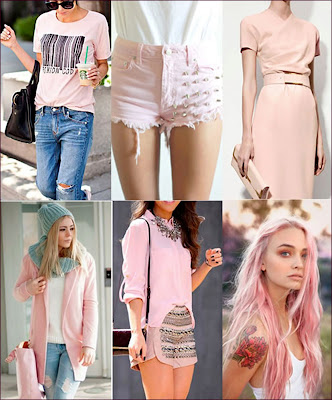 Since then, many designers have incorporated the colour in their work so we now see it not only in womenswear but also menswear, childrenswear, hairstyles, handbags, lighting and the home — the colour pink is most definitely on the map for Autumn / Winter 2016!

In the next few blogposts, I will be featuring a couple of different designs in pink so that you can knit some items with this latest colour trend. The first of these will be a cute-as-a-button baby dress and then a useful jewellery roll in a two-tone pink combination.

It's definitely time for the warm embrace of pink.