I do love print books, but there is nothing quite so satisfying as being able to dip into an E-book while you're away from the house. Just being able to quickly check some detail or other or search for a stitch for that perfect yarn you have just found is invaluable.

So when we were planning our new book, Reversible Knitting Stitches, we wanted to make sure that it could be used both when you're at home and on the road too! You can dip in and out of an E-book, jump ahead, go back to where you just were or read something in depth. It just makes life so lovely and simple.

Initially, we were thinking of it being read on a tablet or iPad, but increasingly I have been finding I like to use my phone instead. I don't usually carry my iPad around and my phone is always there, ready to check out a stitch chart or a line-by-line instruction. I had thought it would be too small to be practical, but instead have found that I really like the way you can zoom in to see small details.

Of course, tablets and phones are great when you are mobile, but I tend to use my computer more when I am at home so we have formatted the E-book to look good on a computer screen too.

The great thing about reading the book in this way is that you can elect to view just a single page or two pages at a time so it feels like a print book. You may need to just check your settings for this. In Acrobat Reader, set the Page View to "Two Page View". and you will then be able to scroll through the E-book much as you would a print book.

You can also use the "Navigation" menu to show the bookmarks list for the different Chapters and Sections, or view the thumbnail images to help locate stitches you'd like to investigate.


For more information about this new book, please click here. The book is available as an E-Book, a Print book or a Print and E-Book package.

Thanks for all the great messages about the new book — it's so good to hear that everyone is as enthusiastic as we are ourselves!

Last Blogpost: And it's here!
Next Up: The crispness of the air 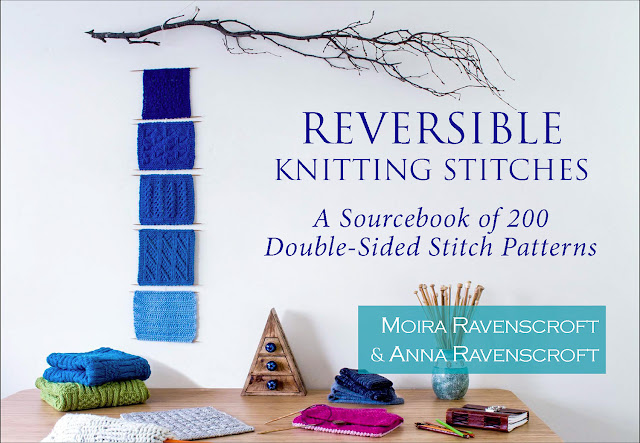 Our new book, Reversible Knitting Stitches, has just been published! I've been talking about it for a few weeks now and here it is!

The idea behind the book was to provide a sourcebook for double-sided stitch patterns so that you can dip into it any time you are designing a new project. 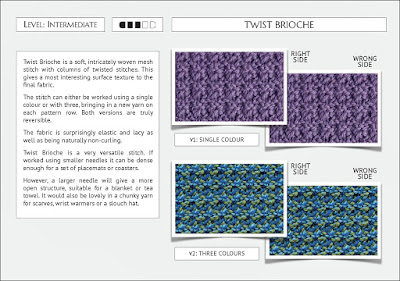 The book features 200 reversible knitting stitches with photos of both the front and reverse sides. Each pattern also includes notes about the stitch and suggestions for its use. Here, for example, is the page about Twist Brioche, which is a lovely soft stitch with columns of twisted stitches.

Every stitch has a stitch chart plus line-by-line instructions so that you can follow whichever method is easiest for you. 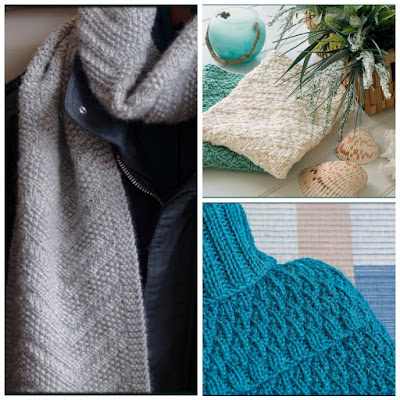 In addition, the book contains photos of more than 50 projects showing the stitches in use to inspire you. These include clothing, accessories and items for the home, but hopefully you'll have lots of ideas of your own too!

So if you fancy trying a reversible stitch for your next project, then this might be just the right book for you!

For more information about this new book, please click here. The book is available as an E-Book, a Print book or a Print and E-book package.

Last Blogpost: A different kind of stitch book
Next Up: Choices, choices...

A different kind of Stitch Book 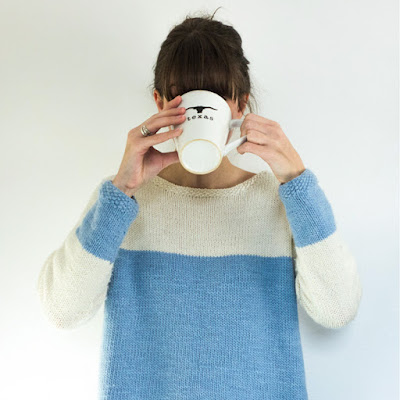 I love books of knitting stitches. I have quite a number of them now and regularly look through them all. The first one I bought was when we were living in Japan a few years ago and it's still one of my favourites. I love the large photos, the clear stitch charts and extra project photos scattered throughout the book — totally inspiring jackets, cardigans and sweaters.

So when Anna and I decided to publish a book about Reversible Knitting Stitches, that's what we planned too: not just to list the stitches but to really explore each of them and add a good number of project photos to show how the stitches can be used. In short, we wanted this to be a sourcebook about reversible knitting.

So here's the first stitch in our new book, Reversible Knitting Stitches: 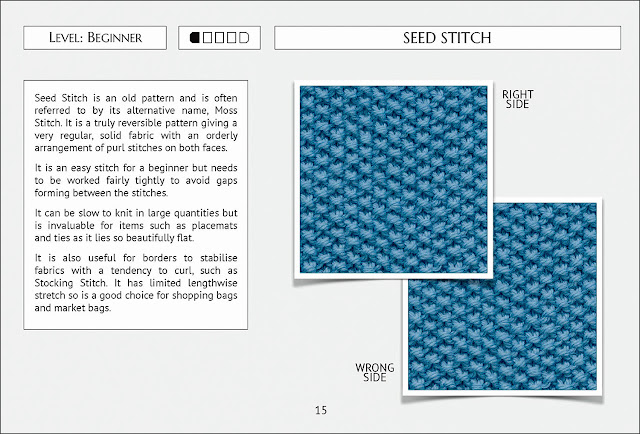 There are 200 stitches in the book and every one of them shows both the front of the sample and the back — even when both faces look the same, as in the example above!

Then alongside, we have described them: how they look, feel, and suggestions for using them. It is, after all, almost impossible to tell from a photo whether a stitch is going to be flexible and a good weight for a blanket or if it would be better-suited as a firm teapot stand. So every stitch includes a number of project suggestions.

We have also included a Difficulty symbol at the top to show whether this is a good stitch for a Beginner or Intermediate knitter, for example. There's an index at the end of the book too, so you can just look at stitches that are easier or set yourself a challenge and explore the Advanced ones!

Then on the next page there are stitch charts and full line-by-line instructions for every stitch, so you can follow whichever suits you best.

The book is formatted so you can read it on your computer, tablet or phone and of course you can zoom the display to really look at the details clearly. This is great for anyone preferring larger print, of course, as you can enlarge the page to check on any specific information. 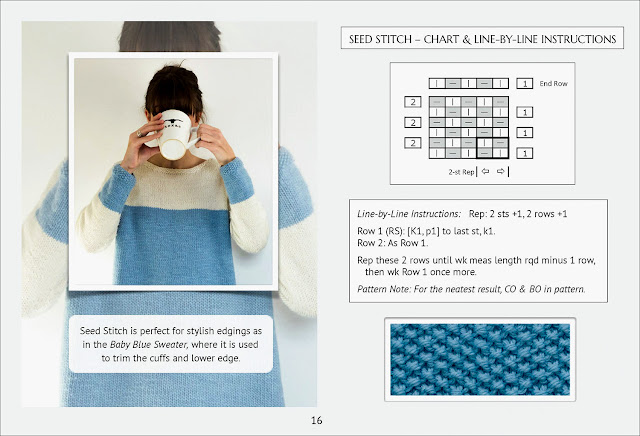 Then scattered throughout the book we have included photos of more than 50 finished items to inspire you. For example, in Anna's lovely Baby Blue Sweater above, she has used Seed Stitch as a pretty trim for the cuffs, neckline and lower edge. 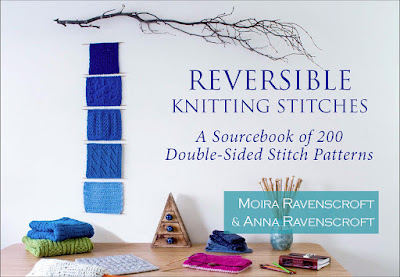 If you would like to read more details about this new book, then please click here. The book is available as an E-Book, a Print book or a Print and E-Book Package.

Last Blogpost: And then there were lots!
Next Up: And it's here!

And then there were lots! 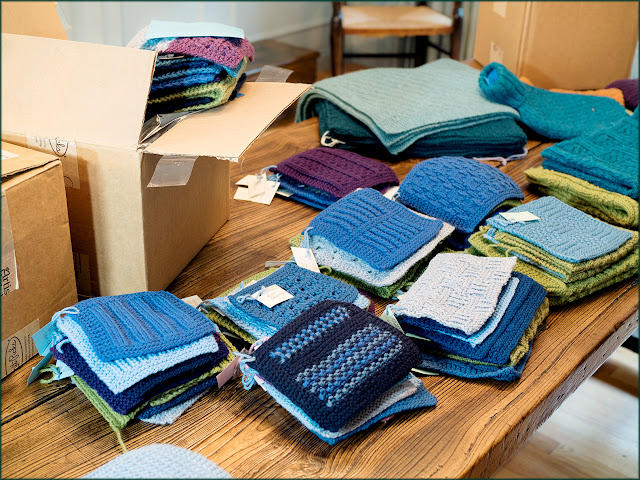 In my last blogpost I reported how my knitter-daughter Anna and I had decided to take our fascination with reversible knitting to the stage of writing a book.

So having decided to do this, we then set to in earnest. Since Anna lives in England and I spend most of my time in the States, this was an interesting exercise! 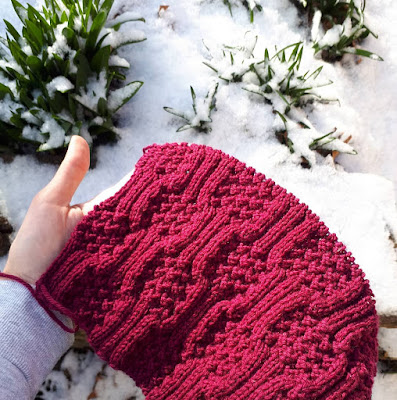 By the next time we got together there were hundreds of knitting samples filling boxes and overflowing into cupboards and onto shelves. Then we started the fun part: trying to reduce them down to our favourite 200 reversible samples.

Now we had our starting material it helped us crystallise our ideas. We decided that we wanted this to be a knitting stitch compendium but with a vital difference: we wanted to really explore the stitches and give inspiration on how to use each of them — in short to be not just a list of stitches, but a sourcebook of reversible knitting.

Last Blogpost: A hint of what's to come
Next Up: A different kind of Stitch Book

A hint of what's to come 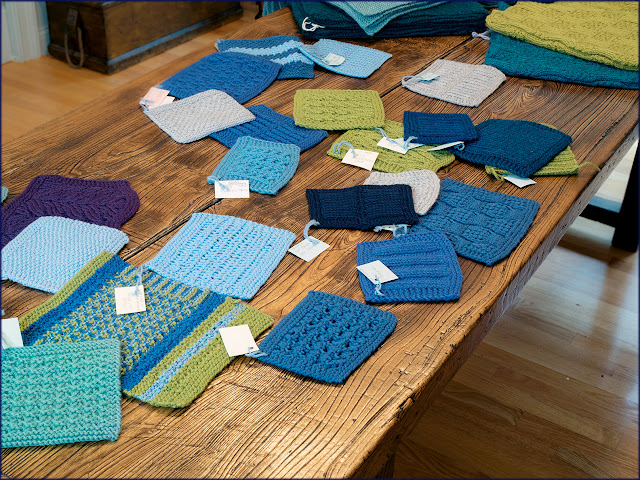 Some years ago, I was convalescing in bed after a series of operations. Of course, being a knitter, I didn't see that having to be immobile meant I couldn't knit, or at least peruse magazines looking for knitting patterns and ideas.

So I started re-reading old magazine clippings I had been hoarding for ages. I went through looking for interesting stitch patterns and glueing them onto pages to put in a box file. By the time I was done, I had three files full of stitch patterns, notes and patterns.

This was before there were stacks of knitting magazines in every newsagents and a shelf-full of knitting books in the local library. In fact, I didn't own a single knitting book, so a file full of stitches was a tremendous resource.

I started experimenting and making up some new stitches and adding extra ones I came across, and that's when I noticed something: I loved the ones that were reversible. 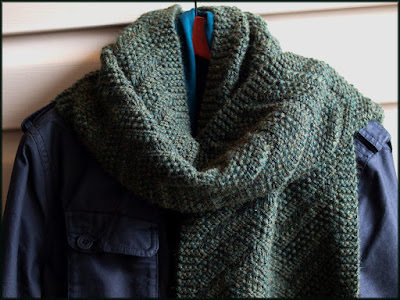 Reversible stitches just drew me — the way they look great from both sides, their drape, their usefulness.

Of course there are thousands of knitting stitches, and most of these look good from the right side. But when the wind blows your shawl and you see the other face then it can often be quite disappointing. Your beautiful design is hidden and you see a series of bumps instead. I suppose it has the name "wrong side" for a reason!

A scarf made from a reversible stitch, however, can be draped around your neck in a playful fashion without any regard to which side is on view, since both sides look good. Sometimes both faces are identical, and sometimes they have a differing character on one side than the other, but both sides have an attractive appearance.

The scarf above, for example, is the Beckenham Scarf, a man's scarf featuring a wonderfully textural reversible stitch, Seeded Chevron.

So I started to gather the samples that were especially lovely on both sides. 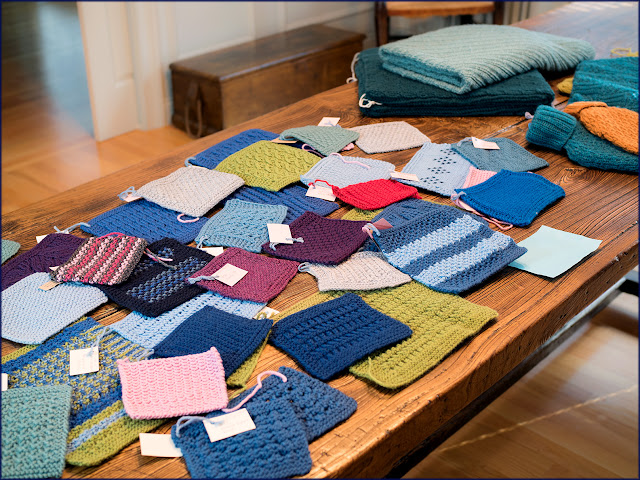 Then my daughter Anna, herself a lifelong knitter, joined in and before we knew it we had a table-full!

We stood looking at the growing pile for a while, then Anna said "We should gather these into a book!"

and that's what's coming this month!

Last Blogpost: Liliwen Baby Blanket
Next Up: And then there were lots!