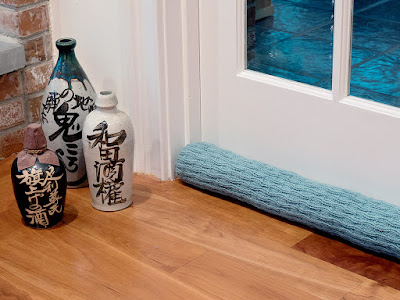 I've written about my flat in Beckenham, Kent before. I don't think I've ever felt so cold and been inside at the time! It wasn't just that the floor was icy, the chairs felt damp and the window rattled with the bitter wind that blew incessantly. It was the draught that came under the door.

It whistled across the floor taking out every last degree of temperature the coin meter had just put in. I would sit down in the evening with my knitting and feel first cold, then colder, then frozen. 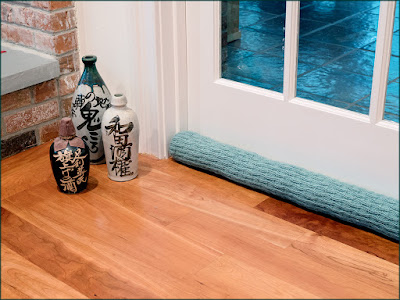 It was at that point that I started knitting a draught excluder. My fingers worked stiffly to complete the item, but on the first evening after it was finished I felt warmer! It was remarkable that something so small could make such a big difference! My heating bills were much lower afterwards, too.

I have been wanting to make a new version of that life-saver for some time, and when I felt the first cool draughts of winter creeping under the door in Massachusetts, I decided that the time had come. The pattern for the Rothay Draught Excluder is now available in my pattern store, so please go and have a look at it there.

The draught excluder is worked in an Aran weight / Heavy Worsted yarn in Valley Yarns 'Amherst'. I love this yarn as it is so soft yet with a great stitch definition. The yarn is 100% merino wool and with a recommended gauge of 18 sts per 10cm/4ins using 5.0mm/US #8 needles. However, if you can't get that yarn, then you could use any other yarn with a similar gauge. 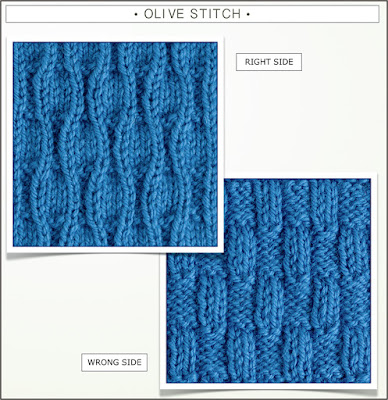 The pattern features Olive Stitch, another stitch from our new Book Reversible Knitting Stitches. This is an easy stitch to work but the results look quite complex, with waving undulations running down the length of the fabric.

The Rothay Draught Excluder can be worked for both inset doors and flush doors so that every cold draught is kept at bay. Tailor one to fit your draughty door and you will be cozy in no time!

A big thank you! 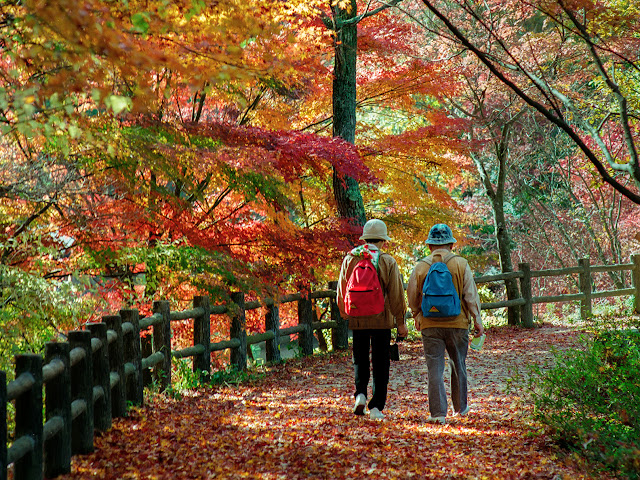 Perhaps it's because I'm a Sagittarius, but I love transition times in the year — trying to catch the last of the previous season before it slips into the next.

In the woodlands right now, the autumn leaves are ablaze with colour and a riot of red, yellow and orange is carpeting the forest floor. 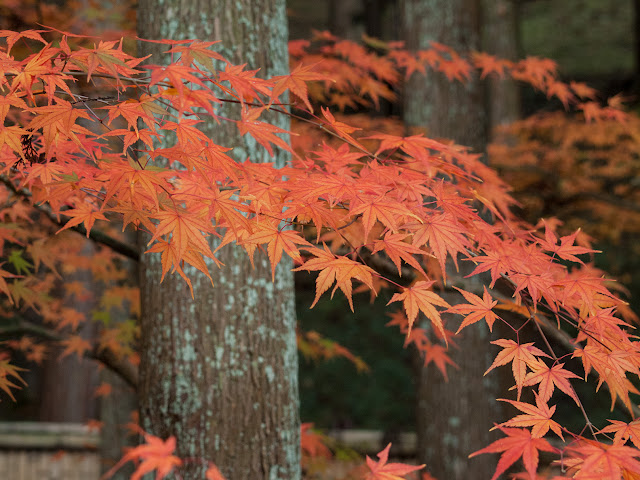 Soon, the leaves still on the trees will also drift down to join the others on the path, then perhaps the first few flakes of snow will arrive shortly afterwards. 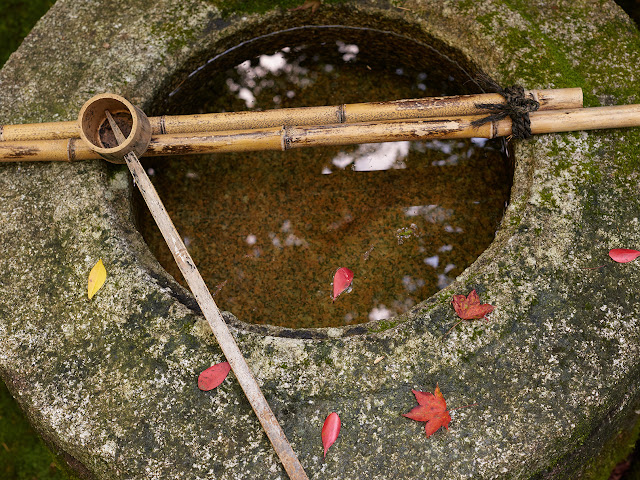 I suppose it could feel a sad time, but to me there is always a lot of excitement surrounding this change to winter.

For a start, there are so many events lined up for the next few weeks. It was our anniversary two days ago, and then in only a few days it will be my birthday. And in-between those two dates there are major holidays in both the USA and Japan. 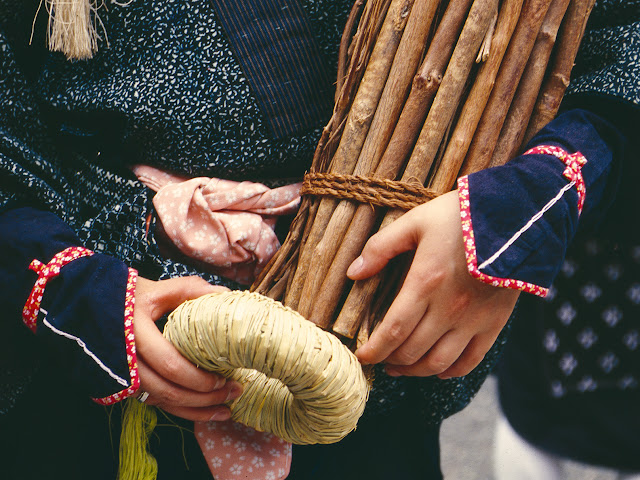 In Japan, today is Labor Thanksgiving Day which replaced the earlier Harvest festival held at this time. Then in the USA tomorrow is Thanksgiving Day. Both celebrate the harvest, the work of the last year and peaceful times.

These festivals give all of us a great opportunity to say thank you to the people who matter — those who have worked hard to make our last year happy and healthy.

So may I take this opportunity to thank all of you! To everyone who has read this blog, connected with me on Twitter, Instagram or elsewhere, to all the lovely folk who have purchased or downloaded a pattern and to the many, many people who have sent both Anna and I such great messages about our new book, Reversible Knitting Stitches — a most heart-felt "Thank you". You have all made 2016 such a memorable year.

And I need to add one last thank you — and that is to my husband Tim for his wonderful photos. I know many of you enjoy his photos too and I am always happy to be able to share them with everyone here.

Have a wonderful Thanksgiving!

Last time: Keep them warm this winter
Next Up: Brrrr — that's a cold draught!

Keep them warm this winter 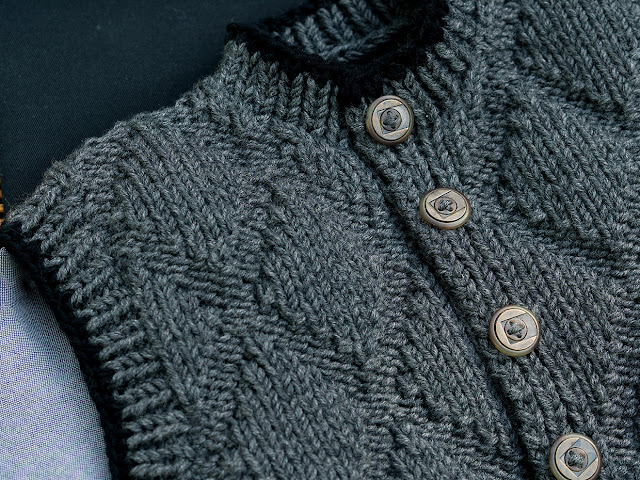 It's a funny thing but when you feel cold, you tend to grab a scarf or a thick pair of socks to protect your extremities. However, most country folk know that what you really need to do is think about your core temperature — keeping your head, heart and lungs warm.

As children, we would all be firmly layered up with a warm wool vest, shirt, sweater and gilet jacket as we set out to play in the snow. The hat and scarf added as an after-thought might end up on the snowman but the other items did the job of keeping us the right temperature. 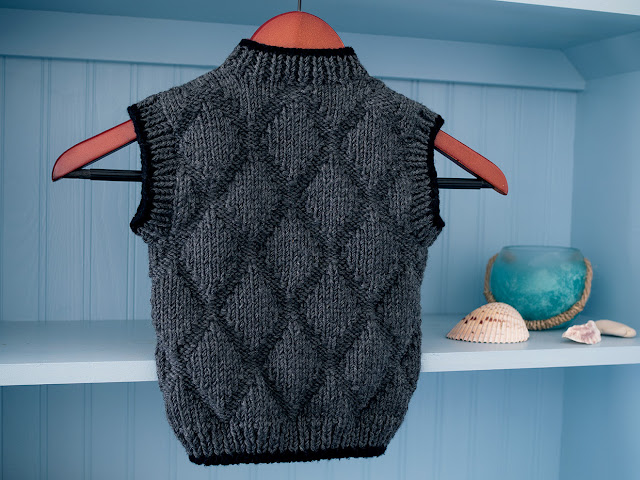 A gilet jacket is great for this as it protects the shoulders and mid-section while leaving your arms free to move — essential for a decent snow-ball fight!

So here's a gilet jacket that you could make now to keep little boys and girls warm during their winter play-time or when they are walking to school. This is the Hebden Gilet Jacket and is sized for kiddies aged 2-8. 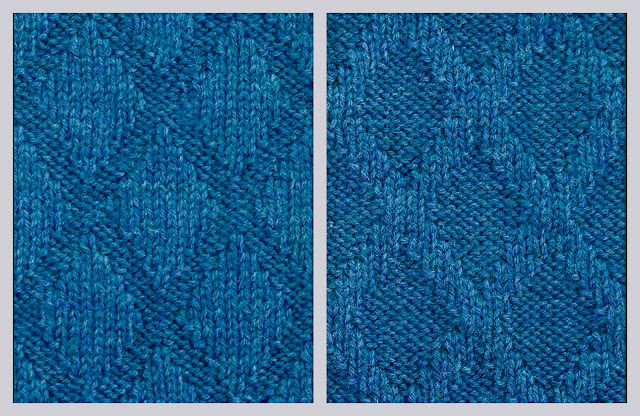 The essential of a good bodywarmer or gilet is that the fabric should trap pockets of air. These air pockets insulate the body, keeping the warm air inside and the cold where it belongs.

The gilet here features a lovely double-sided stitch from our new book, Reversible Knitting Stitches. The stitch is called Imitation Lattice and produces an almost quilted effect, with rugged diamond motifs standing out against a purl background.

The photo above shows the Right Side/RS of the stitch pattern on the left and the Wrong Side/WS on the right. The WS photo shows the deep texture in this stitch pattern, and it is this that gives the fabric its warmth and insulating properties.

The Hebden Gilet Jacket is made from a soft and cozy merino yarn, Lang Merino 120, and features large snap-fasteners for an authentic gilet look.

Until next time - Keep warm!

Last Time: Lazy summer days now just a memory
Next Up: A big thank you! 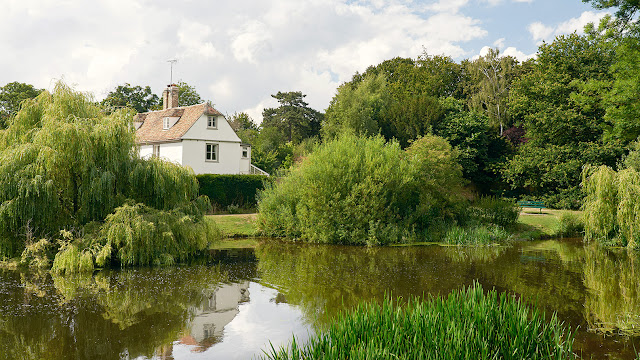 We were in Cambridge a couple of months ago. It was one of those lazy summer days when the most energetic thing we wanted to do was walk down from the restaurant through the Grantchester Meadows to the river below.

The sun was shining and the punts were meandering slowly along the river, picnickers were feeding the ducks, or just sitting with their feet dabbling in the slowly-moving stream. 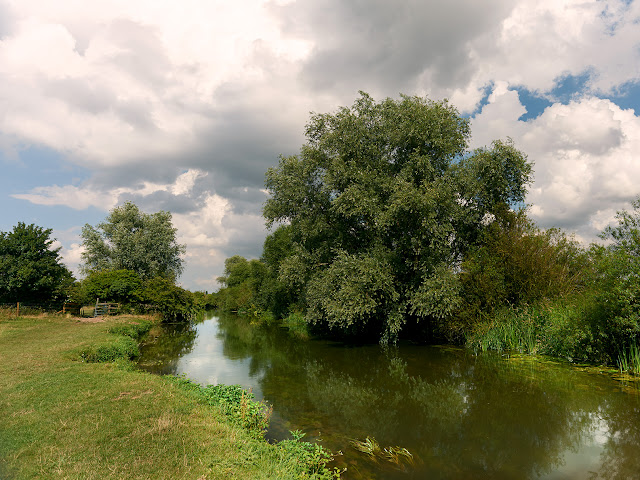 Ah, if only one could bottle days like that... The gentle breeze rhythmically blowing the tops of the grasses into waves of movement, the buzzing insects busily visiting the nodding purple heads of clover.

Pink Floyd wrote a song about this very place:

See the splashing of the kingfisher flashing to the water. And a river of green is sliding unseen beneath the trees Laughing as it passes through the endless summer Making for the sea. 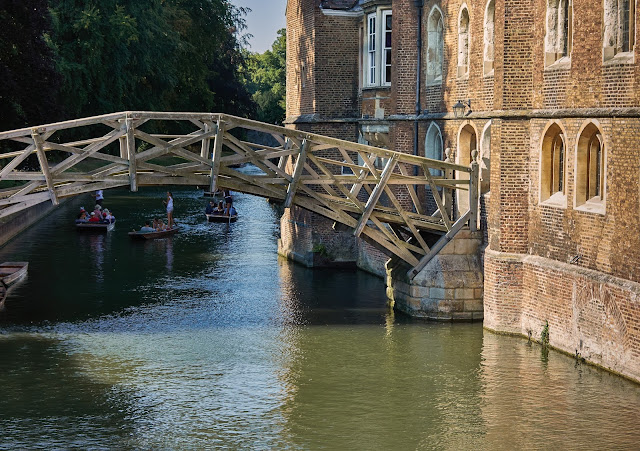 and before them, Rupert Brooke wrote his poem, The Old Vicarage, Grantchester in nostalgic mood from his sick bed in Berlin. It ends:

Yet stands the clock at ten to three?
And is there honey still for tea? 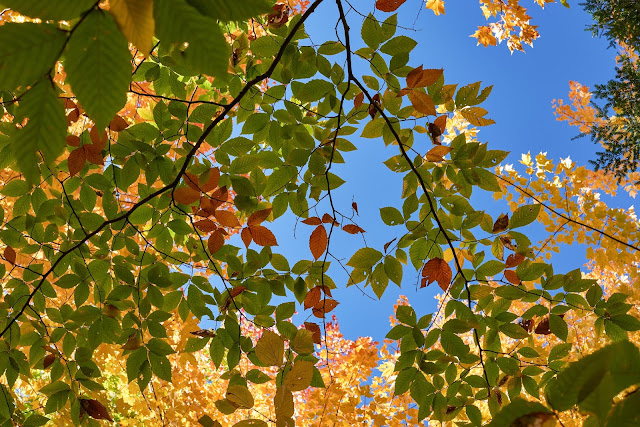 But, no. Summer has gone and a chill east wind has been bringing down the last of the autumn leaves. The snow that has been in the north this week hasn't arrived in Grantchester yet, but it certainly looks as though it might arrive soon. 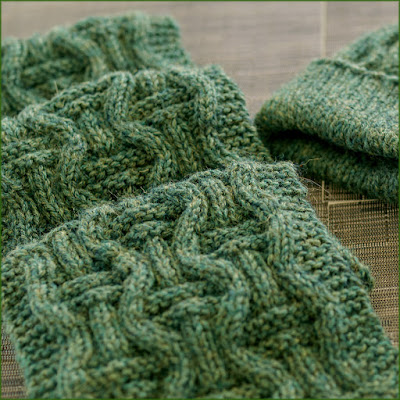 About this time last year, I was knitting a stitch pattern from our new book, Reversible Knitting Stitches, and made what proved to be a super-cozy scarf. As soon as I put it on, I felt warmer and my mind immediately went to the cold, swirling winds of Cambridgeshire. So I named it the Grantchester Scarf.

The stitch pattern is called Ribbon Basket Pattern and is one of my favourite reversible stitches from the book. I love the way the rib and garter patterning make the design move so that the surface becomes covered with deep rugged folds.

Many thanks once again to Tim for his photos. I wouldn't get half as much knitting done without being able to sit and knit while he is taking his great photos! If you'd like to see some more of his work, then please have a look at his Flickr site.

Until next time — Happy Autumn Knitting!

Last Blogpost: Vera calling
Next Up: Keep them warm this winter 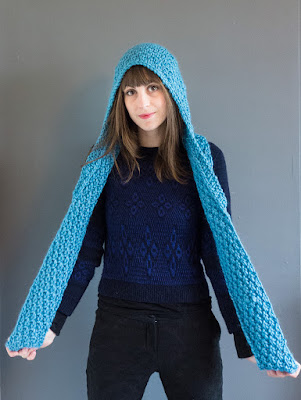 This time of year is all about layering — adding an extra something to keep you warm when it is a little chilly. This is especially important now that the clocks are going back, and your journeys home suddenly seem darker and colder than they were before.

So here's a great idea to brighten those gloomy waits at the train station while the November winds swirl around — a scarf with a hood attached! Pull the hood over your ears when you are out in the cold, then drop it neatly back onto your shoulders when you get to somewhere marginally warmer.

This is Anna's Vera Hooded Scarf, a quick and easy pattern that will have you wrapped up in no time. 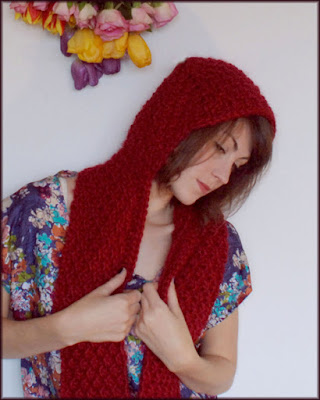 The scarf was inspired by a most fortunate swap shop find some years ago and has been keeping both Anna and myself warm ever since.

The pattern is worked in a lightweight yet chunky yarn which really highlights the texture of the stitch. There are some wonderful bulky yarns around right now and each year sees new ones being featured in the shops, so it would be easy to find something in your local yarn store to get knitting straight away. 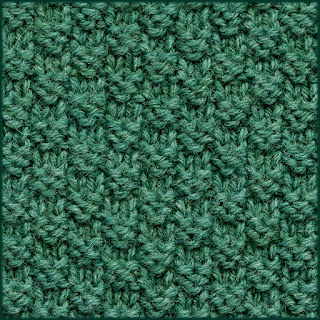 The great thing about this scarf is the way it sits so comfortably around the neck. That's partly down to the reversible stitch that Anna has used for the design, Irish Moss Stitch, which is one of the stitches in our new book, Reversible Knitting Stitches.

This is an old and well-loved stitch pattern but it works especially well for the Vera Hooded Scarf because it gives such a pleasing weight and texture. The scarf just nestles around the neck and keeps out every last puff of breeze. 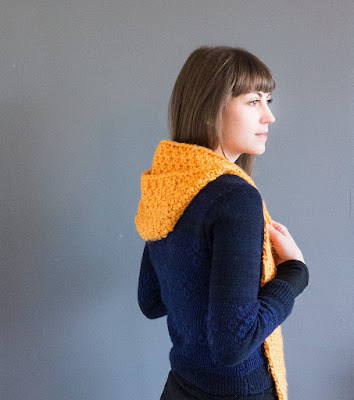 If you would like to see more details about Anna's Vera Hooded Scarf knitting pattern, then please visit her website, www.KikuKnits.com. By the way, if you're needing a scarf right now and don't want to wait to knit it, then Anna has a couple of hand-knit scarves for sale on her website too!

To read about our new Reversible Knitting Stitches book, please click here. The book is available as an E-Book, a Print Book or a Print and E-Book Package.

Last Blogpost: Time to wrap up
Next Up: Lazy summer days now just a memory