Autumn is upon us! 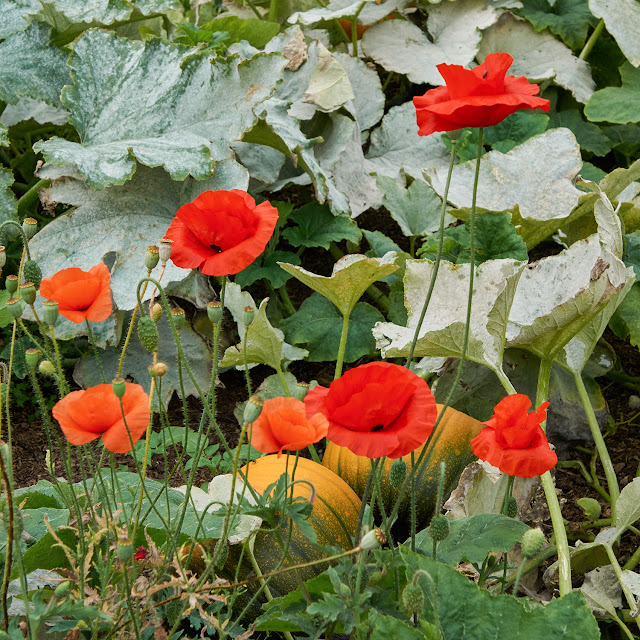 We have returned home after a wonderful trip to England and Sweden. I hope you enjoyed all the "postcards" from our trip. It was great to catch up with everyone, see the fantastic autumnal colours in Sweden and the freshly-harvested fields in the UK. The hillsides always look so clean and yellow when the wheat has just been gathered in. 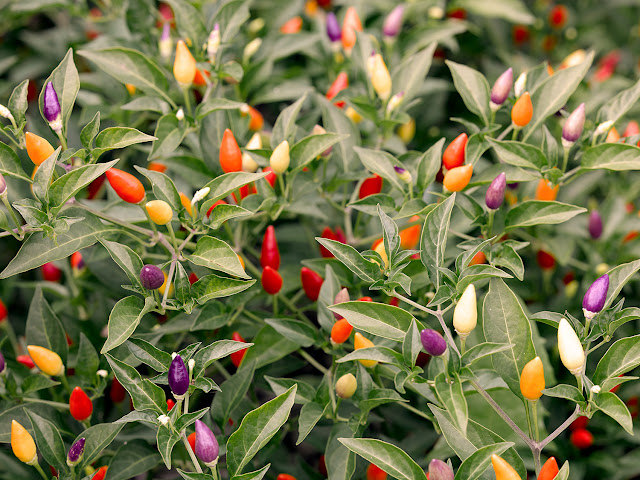 Now we are back in Florida and it feels as though we have been rolling back the seasons as we have journeyed south. There was a definite crispness in the air in Sweden, then a mild summer breeze across the northern hills in England, but I have just come in from mowing the lawn here in Florida and am baking hot. No wonder since it is 33ºC / 92ºF out there, with a heat index of over 100.

So it does feel slightly unreal to be starting work on a new winter scarf, but I know that it will be needed very soon. We are visiting Boston next week and I hear dire warnings of cooler conditions setting in very soon! 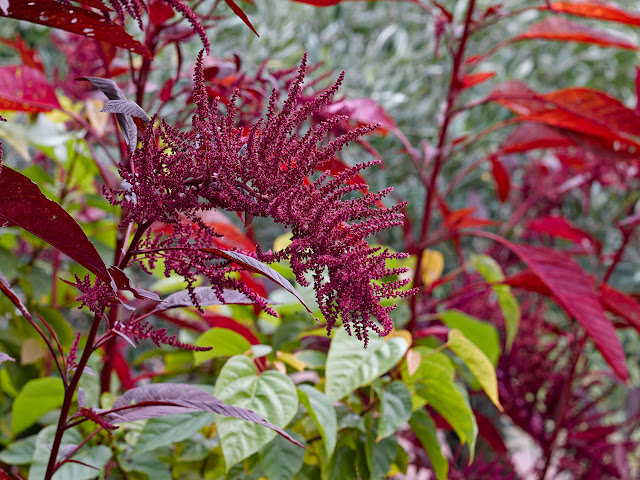 However, if I need any convincing then looking at some more of Tim's photos from our travels will convince me that I need to get working on those winter warmers quickly!

Last Blogpost: Stripes for Summer and Winter
Next Up: Reflecting the Light

Many thanks again to both Tim and Anna for their photos for the last few blogposts. Find them on Instagram: Tim Ravenscroft / x1dman and Anna Ravenscroft / kikuknits

Postcard from Sweden - Walking through history 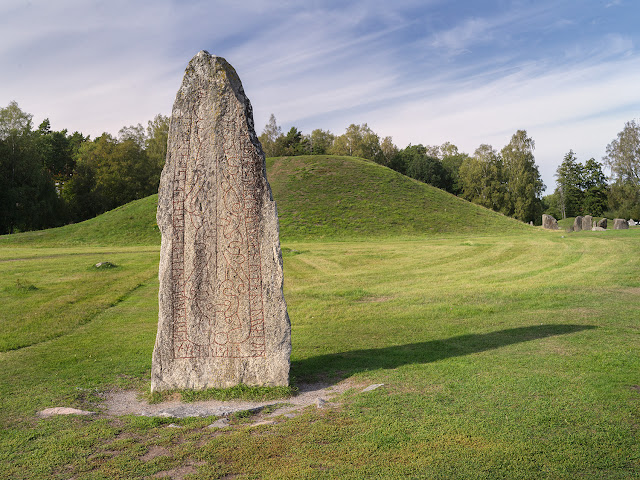 We’re coming to the end of our stay in Sweden after an amazing week. The weather has been superb and we have taken full advantage to visit several of the nearby towns.

We have just returned from the city of Örebro to the west of Stockholm. We found a café near the city centre, Fratelli's, where I ate a wonderful gluten-free pasta in pesto sauce. I may just have to move nearer so I could eat there again! And we only saw one of the three yarn stores in town too, so we definitely need to go back. 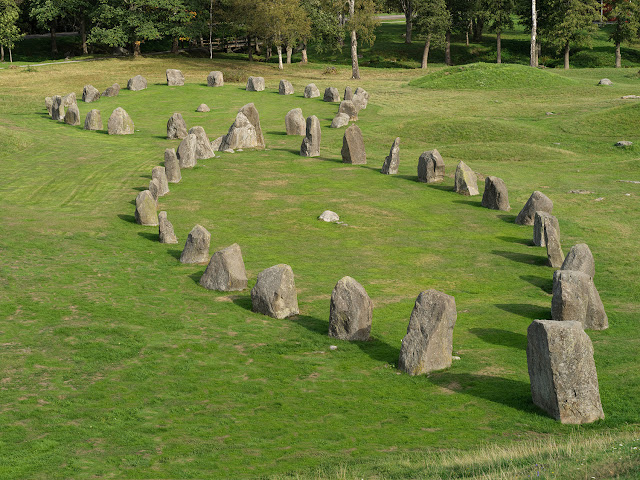 However, beyond wonderful food, amazing yarns and friendly people, we have been struck by the long history of the country. The photo at the top, for example, shows one of a line of stones that a wealthy merchant placed by the side of the road for the new King to see on his procession through the countryside about 1000 years ago.

Behind this runestone, there are several large burial mounds dating from the Iron Age, along with huge stones resembling Stonehenge but arranged in the shape of stone ships. 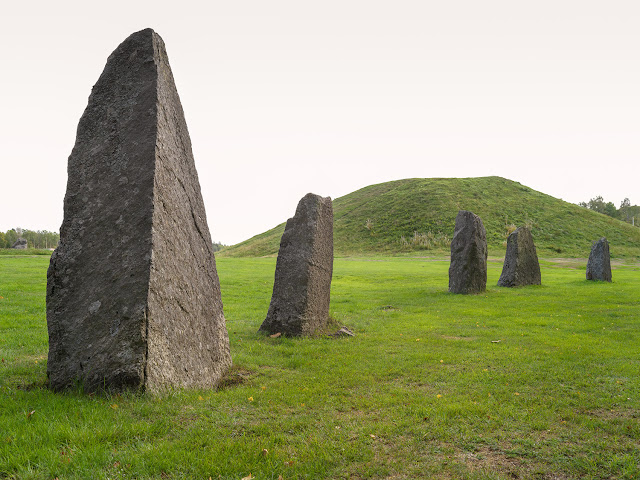 The village near the burial mounds used to be a situated at the edge of an inlet leading to the sea. However, the land has been rebounding since the end of the last ice age and in about AD 1200 access to the sea was cut off so the larger boats could no longer be used there. Now there is farmland where the lake used to be.

You can still see evidence of the force of the ice as a 3 Km ice sheet passed over the land, scouring the surface and depositing erratics across the landscape. The people who lived here didn't have to go far to find the stones for their monuments! 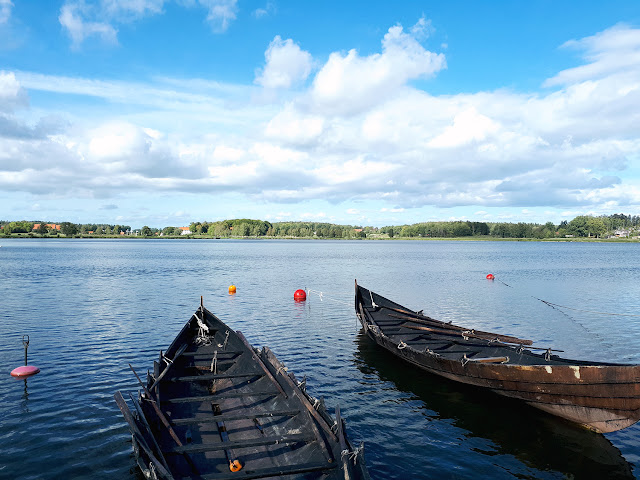 Further down the coast of the lake, a collection of actual Viking ships and boats has been assembled along with reconstructions to show the type of vessels that they would have used for transport, trade and warfare.

In Anna's photo here, two Viking rowing boats are moored by the Lake Mälaren harbour. These boats were often used to transport goods from one port to another or to take people across the lake to attend church. 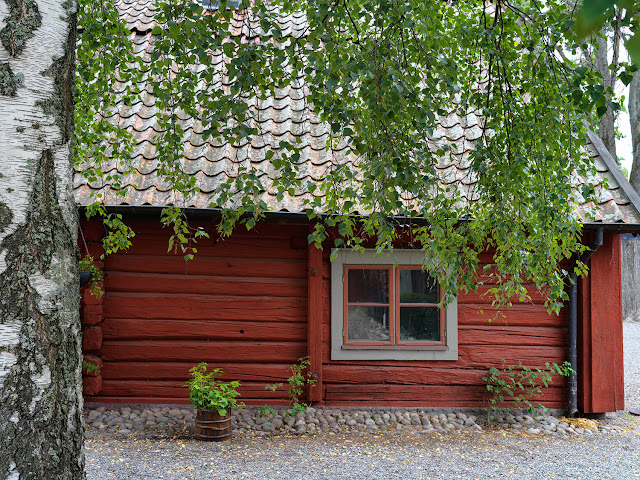 Moving forward in time, several of the towns have areas where buildings from the 17th and 18th century have been preserved. The photo above shows one of the buildings in a conservation area in Anna's hometown, Eskilstuna. The area is called the Rademachersmedjorna or Rademacher's Forges after the Dutchman who established his forge here.

There is still a working forge at the site, and other buildings are used by weavers and artisans. We purchased a long woven tablerunner in blues and yellows and also saw some wonderful knitted mittens, scarves and gloves. 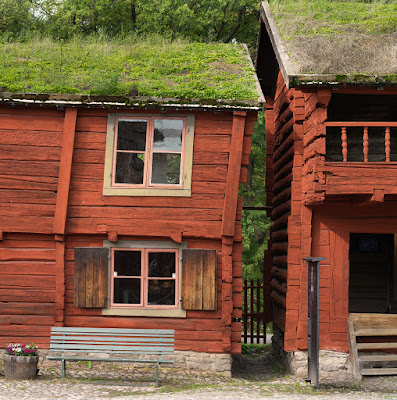 And this is the Wadköping area of Örebro. One small building had an information board outside saying that a poor shoemaker and 60 other people lived there! As in Eskilstuna, the area still feels very lived-in as each of the buildings houses craftsmen, puppet-makers or artists, so there is a lot to see and do as you walk around.

Well, tomorrow we start our journey back to the USA and I'm keen to try some knits incorporating the colours and sights from our trip. It is truly an inspiring country.

Many thanks to both Tim and Anna for their wonderful photographs for this blogpost. If you would like to see more of their work, you can find Tim on Instagram as @x1dman while Anna is @kikuknits. They’d love to see you there!

Until next time - Happy knitting!

Last Blogpost: Postcard from Sweden - Collecting colours and umlauts
Next Up: Autumn is upon us! 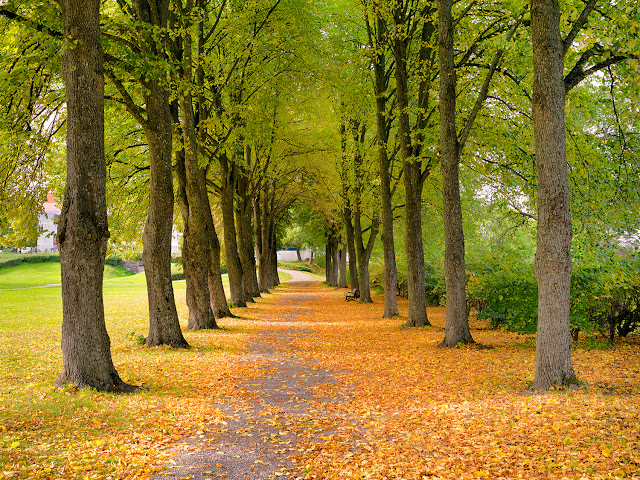 We have arrived in Sweden and have been greeted by clear blue skies, autumnal colours and amazingly friendly people. We are visiting our daughter Anna and her fiancé in their new home in Eskilstuna, a small town about an hour's drive to the west of Stockholm.

The town is not far from a large lake called Lake Mälaran and yesterday we visited Sundbyholm, where there is a beautiful marina and lake-side beach. We battled against a strong wind to the end of the headland and I was exceedingly glad that I had brought my Sawston Infinity Scarf with me. Gosh, that wind was chilly! Such a contrast to our usual Florida temperatures.

Tim found an impressive avenue of trees leading up to the nearby castle, with fallen leaves in oranges and reds already carpeting the path between. 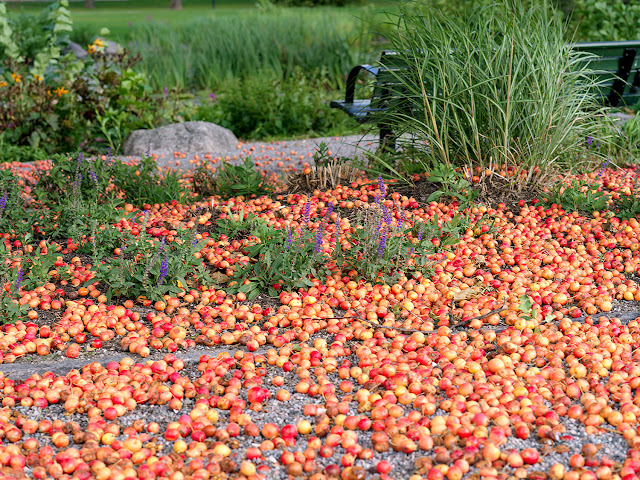 Later we went into Eskilstuna, where a similar carpet lay under a Crabapple tree, only this time the colour came from hundreds of small red crabapples, with a heady aroma of sweet cider filling the air. 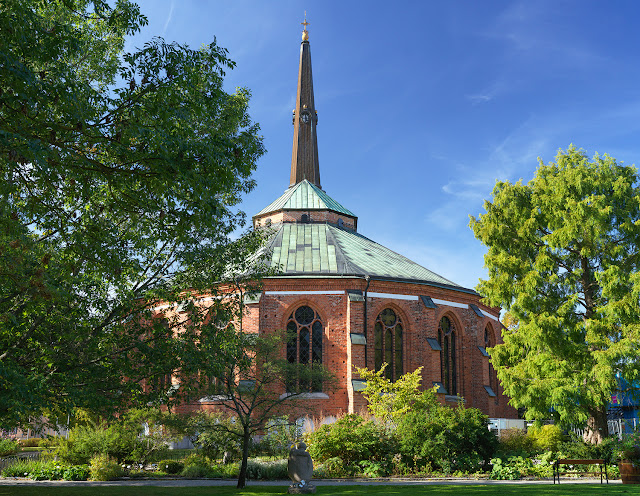 Today, we drove a little further away to a town called Västerås, with old cobbled streets and timber-framed buildings running alongside a small stream. The Cathedral in the centre of town was particularly striking, with bright stained-glass windows in blues and greens. I could imagine many of the colour combinations in knits!

Our visit was made complete by discovering a wonderful small yarn store, Upplings Yarn, as we were walking around the town. I particularly enjoyed exploring some yarns from Sweden and Norway that I had not seen before. 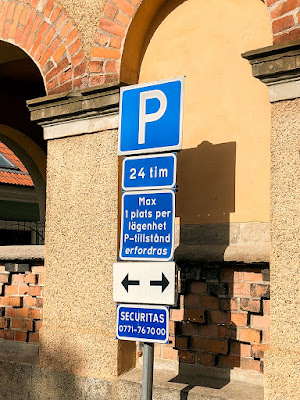 Many thanks to my DH Tim for all the great photos above – and here are a couple of fun ones to finish. "Tim" means hour in Swedish, so all the parking signs have his name on them! 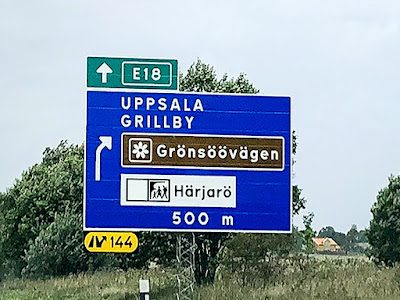 And here is another fun discovery we made: a tourist destination with 4 umlauts! I'm now on the lookout for any place with more – let me know if you have seen any.

Many thanks to Tim for his photos. If you would like to see more of his work, then please visit his Instagram page. 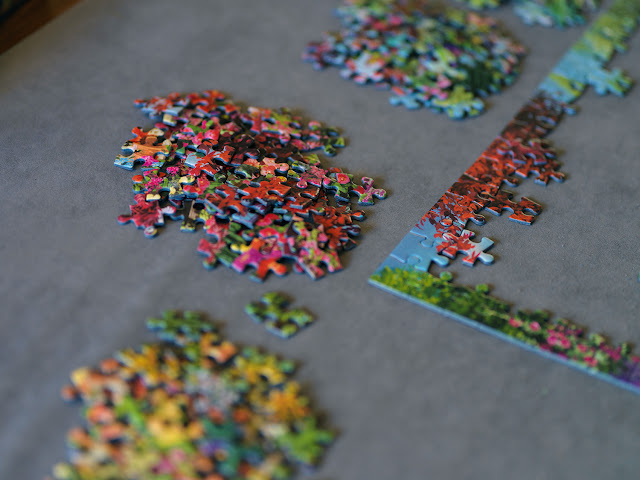 One of the joys of visiting relatives is being able to join in with their favourite hobbies. In the case of Tim's Mum in the UK, this is to open up the puzzle board and help out with adding more pieces to the jigsaw.

Today we had the joy of helping her start a new puzzle - always an exciting moment. We spent a happy hour or so, finding the edge pieces and corners to define the borders. 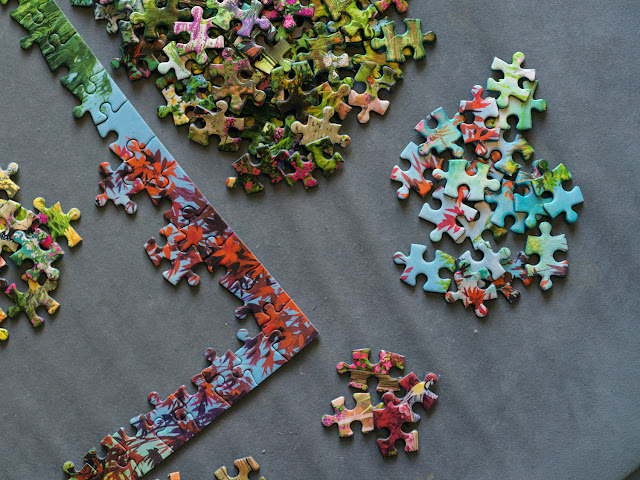 Then we went out for the afternoon and when we returned, she had sorted the remaining pieces into wonderfully colourful batches of pieces. I had never thought of doing this before but found it fascinating.

I love this pile of turquoises and blues, for example. It may be the smallest pile on the board, but I love the bright clarity of the colours. 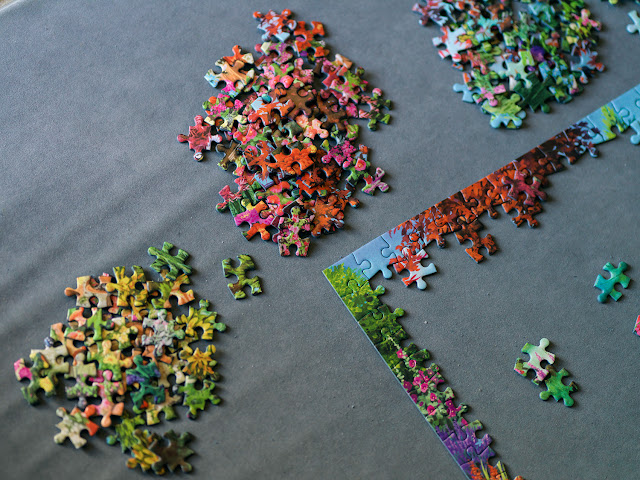 And here are the autumn colours on the left, with daisies, leaves and pathway colours mingled together right next to a gloriously zingy pile of cerises and reds.

It is such a simple technique, but not one I have ever seen before. Let me know if that's the way you like to start a jigsaw too. I'm sure there are lots of different ways to set about the task. I'd love to hear what everyone else does.

Anyway, it's time to get back to the jigsaw now – I think I can see exactly where that bright blue piece fits!

Last Blogpost: Stripes for Summer and Winter
Next Up: Postcard from Sweden – Collecting colours and umlauts