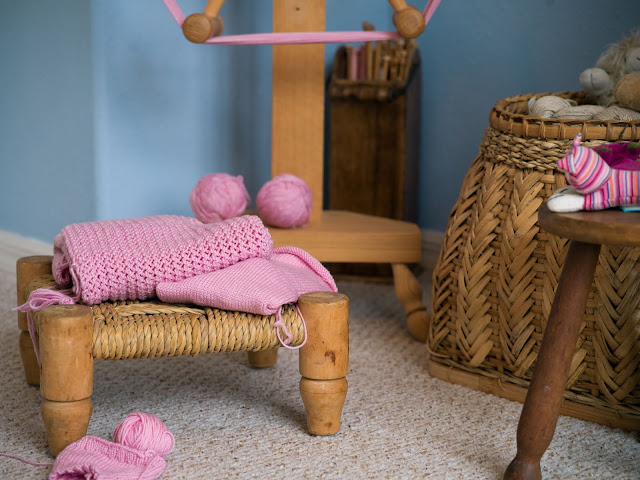 As you may have seen from my last few blogposts, I have been knitting a pink cardi recently – despite the heat and humidity in this part of Florida! Summer is brutal here and it can make you seriously question why you are trying to knit anything. Still, it would be a sad day that didn't involve at least some knitting, wouldn't it...

So now that I am mostly finished with my cardigan and just needing to sew the pieces up, I can safely recycle the yarn I used for my samples. I always like to work a number of large-sized samples and leave them in place while I am working the main garment in case I want to compare them with the work in hand.

However, now would seem a good time to take those apart and prepare the yarn ready to use for something else. 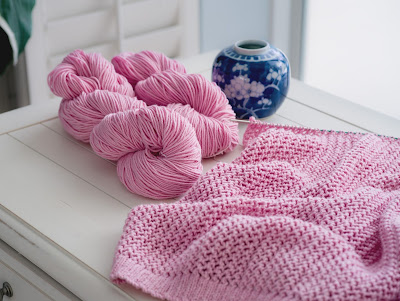 So here's the wonderful thing about knitting: it might take a few evenings to knit something, but it takes only a few minutes to undo! That was something I learnt to appreciate when I was weaving. You would spend ages scrambling around under a loom or tie-ing up the warp. Then finally you could start your project. However, if you saw a mistake or wanted to change something, then it took an absolute age to undo.

No problem with knitting. It's as easy as pie, but you do need to do some work to get your yarn back so it is nice and smooth again. So if you don't know how to do that, read on:

Firstly, you need to wind your yarn into a skein. I actually do this in two stages: first I wind it into a ball, then I skein it up. It just seems to work slightly better that way than trying to deal with the undoing and skeining at the same time.

At both stages you need to make sure the yarn doesn't get over-stretched or it won't look the same as it did the first time you worked with it. 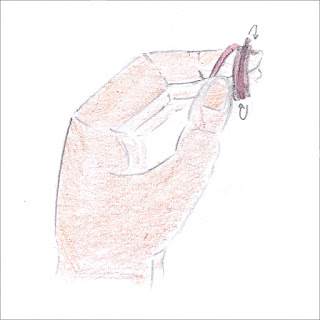 So, start by finding an end to work from. In the case of my samples, I don't cast them off so it is simple to undo, but with a finished piece you might need to discover where the yarn tail was sewn in and prise it free.

Tease out a little yarn and wrap it around a couple of fingertips a few times. 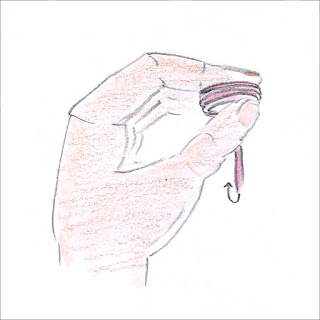 Take it off, pinching it between thumb and forefinger so it doesn't break free. 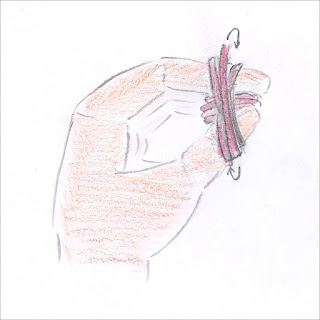 Now start to undo your knitting, taking time to appreciate the little pop-pop sounds the stitches make as they are released from the knitting! Wrap the yarn around the tiny ball, trapping your thumb and finger in place so they make a little space between the strands of yarn. 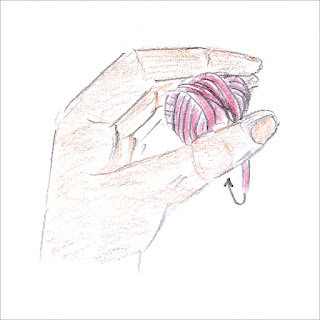 Wrap about 5-7 times, then remove your fingers, turn the ball slightly and wrap in a new plane. 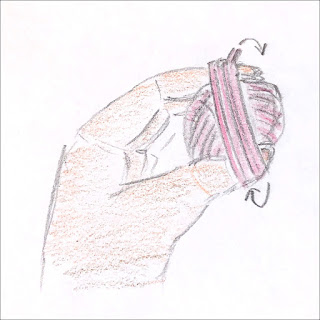 Keep doing this until the ball is large enough for you to hold between your thumb and two fingers, then as the ball grows in size between thumb and three fingers, nicely spaced apart. Wrap over all the fingers holding the ball, so that when you remove your hand the yarn will be able to relax unstretched. 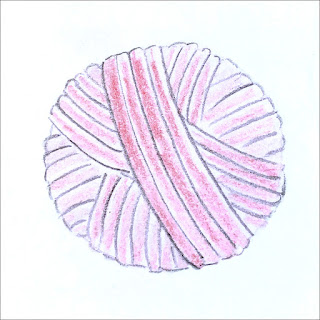 Continue to wind until you get to a yarn tail, then stop. Set that ball aside and start a new one, even if the ball is only very small. Continue undoing your knitting until you have reached the point where you either made the mistake / changed your mind / reached the end!

If you are carefully undoing a small section back to where you made a boo-boo, then stop winding a row or so before that point and capture the knitting onto your needles. Then gently undo the work, stitch-by-stitch until you get to the place in question. It is all too easy to undo too much knitting as it happens so fast! 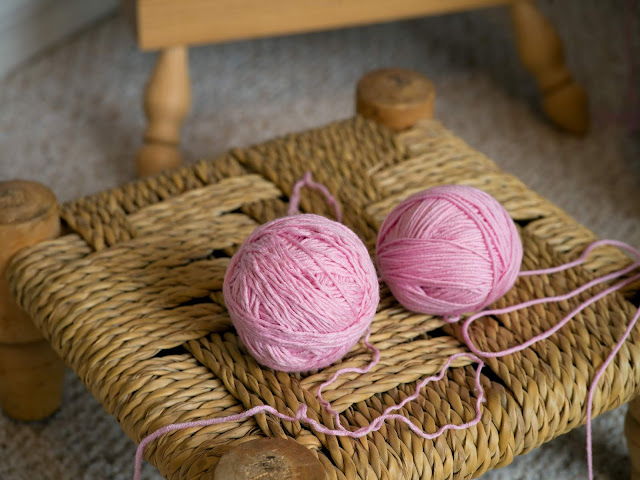 So now you have your yarn ready in balls and waiting for the next stage. Have a look at the yarn – can you see how it retains a crinkly "memory" of the knitting? In the photo above, the ball on the right has not been used yet, while the one on the left has just been unwound from a sample. If you tried to knit with this yarn, your knitting would not be smooth or even. Worse, after washing, those waves would relax and your knitting would spread. 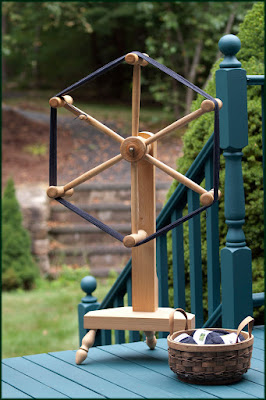 To do this, we need to first wind the yarn into a skein. I covered that here so follow those notes to wind the ball into a skein. Now, if the first ball was a large one your skein might be big enough to work with. If so, then add some figure-of-eight ties as I showed in that blogpost and set the skein aside.

However, if you have lots of small pieces of yarn, start by winding the first onto the skein winder, then tie the next one on with a large and very purposeful-looking bow (you want to be able to find this easily later). Now keep on going until you have a good-sized skein. Tie a piece of waste yarn to the very last piece of yarn so you can identify that point when you come to undo the skein, and again secure the whole skein with figure-of-eight ties. 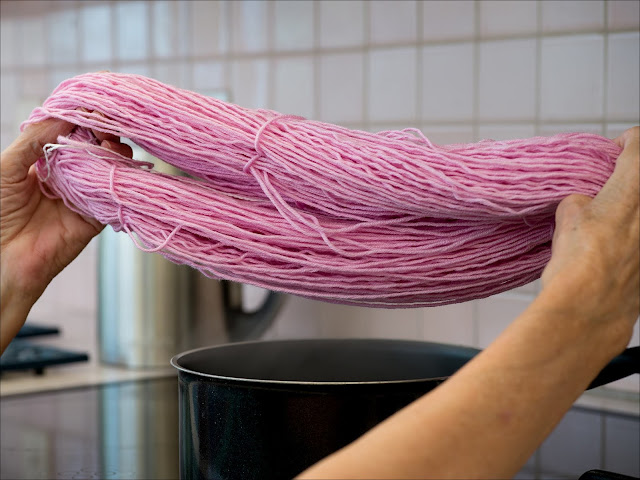 When you have all your skeins prepared, adjourn to the kitchen. Put the kettle on, first to make a cup of tea, and then put the remaining boiling water into a wide, flat saucepan. Carefully hold the first skein over the top of the saucepan and "bounce" the centre of the skein up and down or side-to-side in the steam.

You will see when it starts to relax a little as the strands will get straighter and your hands can move a little further apart. 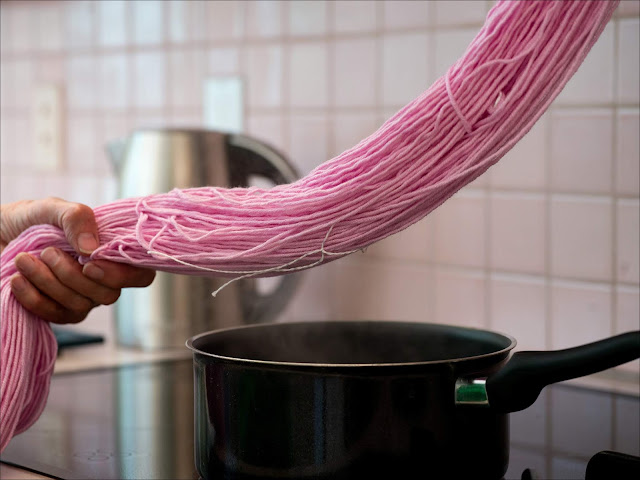 Move away from the saucepan, waft the skein in the air to cool it a little, then move your hands to position another part of the skein into the middle. Steam that part and continue doing this until the whole skein shows soft, even yarn with no crinkles. 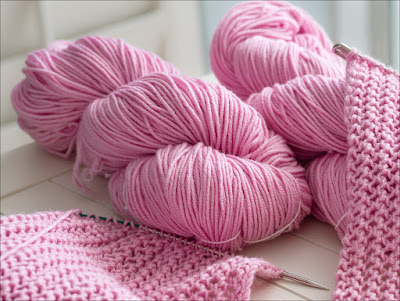 Repeat this process with every skein, then set them in an airy place to cool and dry. Don't weight them, but just let them rest until they are ready to use. Then off you go! You're ready to start knitting / reknitting as the case may be.

I hope you enjoyed reading about the delights of reusing yarn. I always find it a very satisfying process seeing old, crinkly yarn turning into fresh new wool!

I am off on my travels again, this time to the UK and then to Sweden to catch up with my daughter Anna and see some of the lovely knitting she has been producing recently. I'll post my next blogpost from there!

Btw, Anna has a brand-new blog, the "Adventures of a Happy Knitter", so please go and have a look at that here.

Until next time – Happy Knitting!

Last Blogpost: Are you using the right needle?
Next Up: Where we like to knit