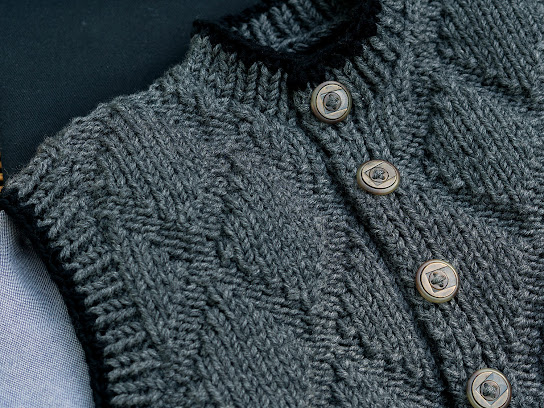 Over the last few blogposts, I have been extolling the virtues of using two ends of yarn held together to add extra qualities to your knitting and to maximise the potential for finding interesting yarn combinations for your next project. So in this last blogpost in the series, I want to touch on some tips and techniques for working with doubled yarns.

So let’s turn our attention to how we can work with two ends of yarn held together – and the answer is that there are a number of different ways. The first and most obvious is to take one end of yarn from two or more balls of yarn and hold them together as you form your stitches.
This is a simple solution and works quite well except that the balls of yarn can get tangled together as you work. Each stitch either imparts a little extra twist into the yarn or takes a small amount out, depending on your style of knitting. This change in twist makes its way down each length of yarn leading to the ball and after a while you might see the two ends tightly coiled around each other.
You then need to stop, pin the yarn end onto the ball of yarn, then hang the two balls of yarn from the work and allow them to untwizzle. I actually quite like doing that so don't see it as a major inconvenience. It's quite satisfying seeing them untwisting!
You can reduce tangling to some extent by having each ball in a separate container, or working with both strands coming from the inside of each ball. That will at least prevent the balls from rolling all over the floor. 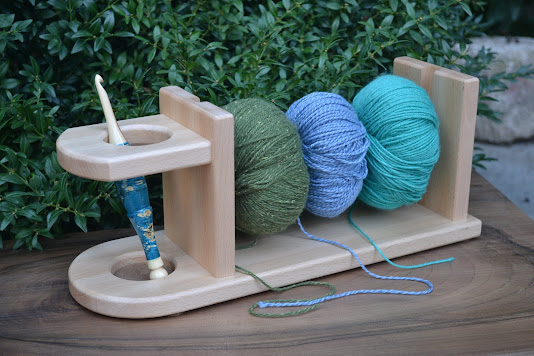 Alternatively, you can mount each ball on a yarn dispenser so that they rotate as you work. These devices are sometimes called "Lazy Susans" or "yarn spinners." Some of these have a central vertical pin to hold the cone or ball of yarn, while others mount the balls of yarn side-by-side as in the example above from the Letto Workshop on Etsy. Rotating the yarn ball allows the yarn to unroll from the outside to keep the threads separated. 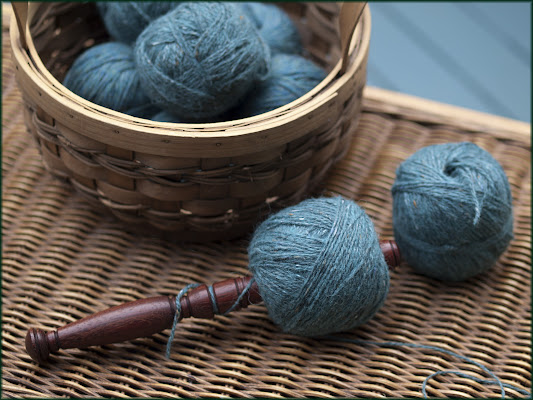 A second way to work with two ends of yarn is to wind a centre-pull ball. This photo shows a ball I was winding using a Nostepinne, but there are a number of ways to make a centre-pull ball of yarn.
Once you have this wound, you can then use one end of yarn from the inside and one from the outside. Some people say their knitting is not quite so even if they do this but I haven't actually seen that myself. Perhaps it depends how you wind your centre-pull ball. Whichever way you do it though, it is simple and there is only one ball to look after, but you might still need to stop and untwist the yarn ends from time to time.
One of the key advantages of this method is that it is really good for small projects where you really only need one ball of yarn, and you are less likely to end up with more remnants to add to your stash.
However, a slight disadvantage of this method is that you will come to the end of the ball more quickly. You will then have two old ends and two new ends all to be finished at the same point. With two separate balls of yarn the balls tend to end up being slightly different lengths so the joins are staggered.

Then the third way is to take the two or more strands of yarn and wind them together into a meta-ball. This is a good method if the two yarns are the same or very similar in composition, so it works well for two different colours of the same yarn, for example. However, it is not such a good method for yarns with a different fibre composition as one yarn might stretch more than the other.
It also takes more preparation time and is hard to undo if you decide you want to use just one of the yarns on its own later. However, it is the simplest to knit with and is probably the best if you are going to start knitting a large rug or an art project with multiple ends of yarn!

One thing to note is that when you are working with two ends of yarn held together, every stitch on your needle will show as a pair of loops. Then when you come to work the next stitch, your needle will need to go through both loops as though it were a single, thicker yarn.
The two strands of yarn will sit next to each other in each knitted stitch. This gives quite an interesting effect as you can see in the Hebden Gilet Jacket at the top of this post.
You do need to be careful that you don't inadvertently split the stitches apart when you are working or you will change the number of stitches on the needle. Of interest, you can use this as a technique for increasing the number of stitches, but you don't want to end up doing that by mistake.
In addition, you need to make sure that both of the yarn ends wrap the needle to create the new stitch every time. If you inadvertently only use one thread to form the stitch, then that will create a thinner stitch at that point because you now only have a single strand where you should have two. However, you will usually find that you will detect this fairly quickly as the yarn ends you are working with are now a different length, so that is usually quick to fix.
I hope you have enjoyed this blogpost series and that it will give you lots of inspiration for future projects! If you would like to return to the introduction to the series, then please click here. If you would like any more information about the patterns that I have featured in this series, then please visit the pattern store on my website.
I'll be back soon with updates on the knitting I am currently working on for spring and summer.
Until then - enjoy the lovely Spring weather!
Moira