It's good to have options - Beckenham Scarf v2.0 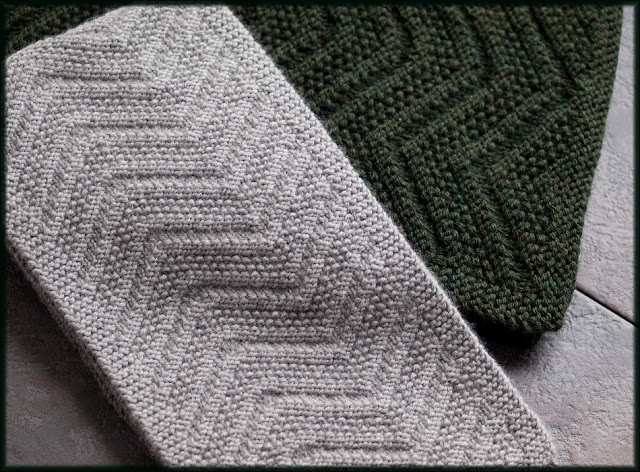 Thanks for all the feedback on the Beckenham Scarf knitting pattern — I am glad that everyone is enjoying this so much. I am posting an update today as I have had a number of requests for additional sizes, so I'm happy to oblige.

In this new version, I have included three different widths and lengths so you can really tailor your project according to the person you have in mind. There are now charts and instructions for a Slim, Medium and Wide size, each with a slightly different look — and of course all are completely reversible, like the original. 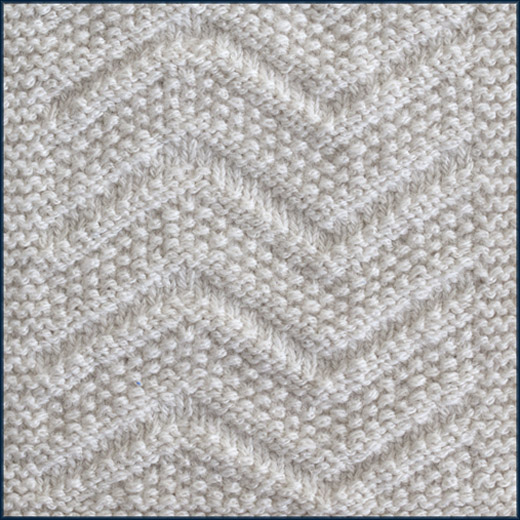 The stitch chart for this scarf has deep "V" pattern shapes. This gives a dynamic, modern edge which could be further emphasized by strong colour choices.

Working in a worsted weight yarn such as the beautifully soft Amherst by Webs, this scarf will measure a neat 18.5cm/7.5 ins in width x 150cm/60 ins in length. A thicker yarn such as Berroco Vintage Chunky will give a larger scarf with a comfy width of 24cm/9.5 ins, just right for filling in the gaps at the top of a collar. 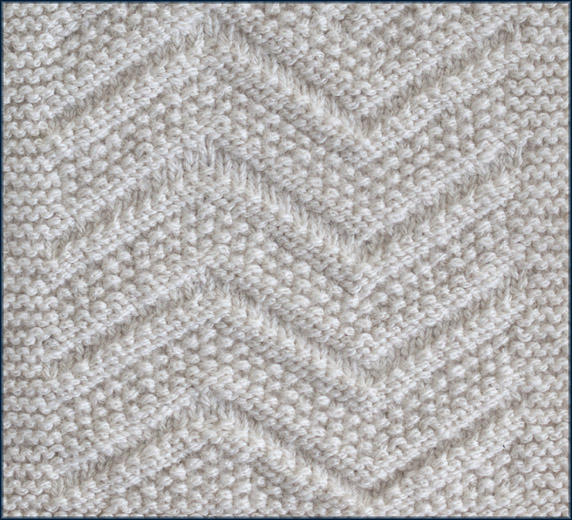 The medium scarf has a slightly wider chevron patterning which gives a pleasing, classic result. 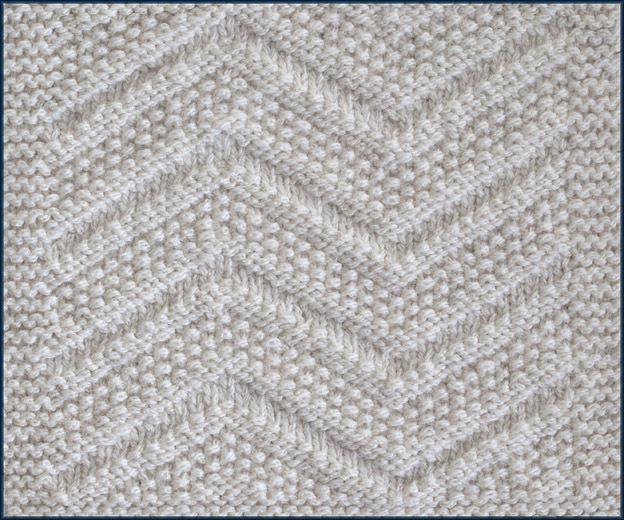 This is the original version of the pattern and features a wide chevron design with a low 'rise' in the V-shape patterning, giving a sophisticated feel to the final fabric.

It has a width of 21.5cm/8.5 ins when knitted in a worsted weight wool, and 28cm/11 ins in a chunky yarn — perfect for the fashion-forward set. Both measure 185cm/72 ins in length which is a good length for interesting knots such as the Four-Way Wrap that I was writing about recently.

I hope you enjoy working with these variations. As I said in the title: it's good to have options! The samples have been worked in another of my favourite yarns, Cascade Yarns Eco Cloud, a beautifully soft merino/alpaca mix with great stitch definition.

If you're not sure what size scarf you'd like to make, then please see my earlier blogpost "How long shall I make this scarf?" which has some pointers to different sizes of scarves and their uses. 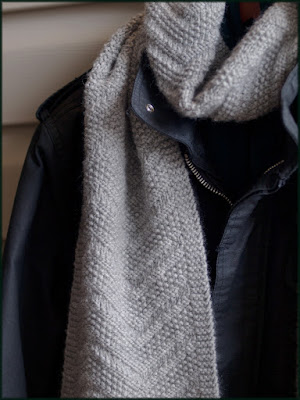 You can also find my original post about the Beckenham Scarf here. 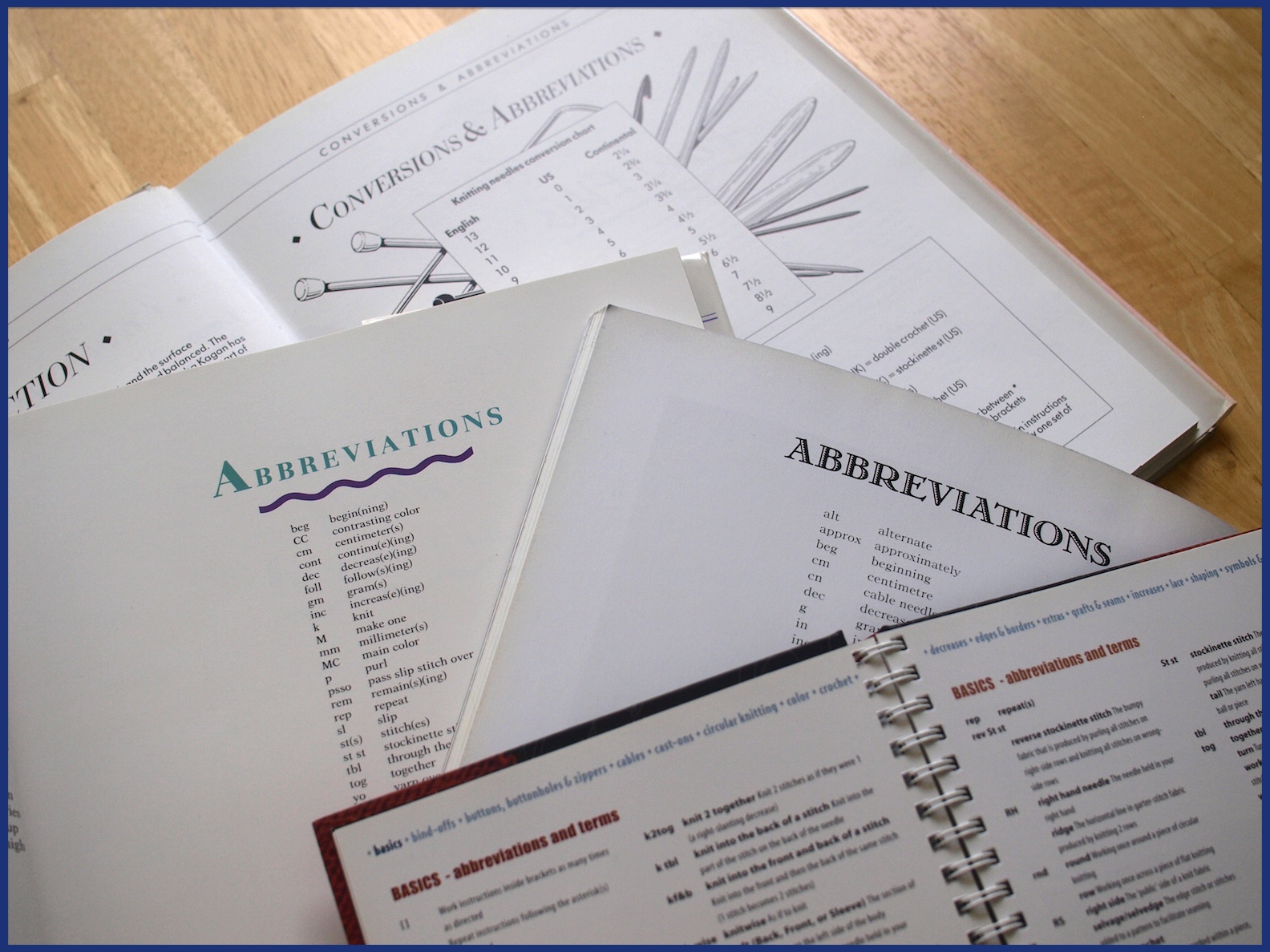 I remember meeting someone at my driving test when we were first in the USA. As we all waited for our turn around the driving course he said that he was going to "really make something of himself — go to work for some three letter organization."

I really had no idea what he meant at first and then figured it out. "Oh like IBM or the CIA, you mean?" I said. "Yeah, that's it." Quite a surprising difference between the two of course, but he didn't seem to mind. Once you were with a three-letter organization of some kind then you had really achieved something.

And it's the same in knitting, isn't it? When Barbara Walker was putting a name together for her new stitch technique: "Slip two stitches knitwise, one at a time, to the right-hand needle, pass them back to the left-hand needle and knit the two stitches together through the backs of the loops", she coined the term "SSK".

This elegant shortening captures a lot of information in just 3 letters: Slip, Slip, [remember to do all that bit in the middle without another letter coming into the name], Knit [two stitches together tbl]. Simple, easy, catchy.

So why do we still have k2tog and p2tog? Why haven't these morphed into K2T and P2T? Personally I think this would be an improvement, and surely the magazine folks would prefer an acronym with just 3 letters instead of 5. Fewer column inches and much easier to read. It is also a better mirror of the SSK, since these often occur together. For example:

The second one there definitely gets my vote! Of course we can say it's tradition, but we have long since lost the "K1, sl 1, psso" abbreviation [Knit 1, slip 1, pass slip stitch over]. This is now reduced down to the much more succinct "KSP" [Knit, Slip, Pass].

Over time we have changed many other knitting terms such as "widen" [increase] or "narrow" [decrease]. The term "narrow" was our dear friend "k2tog" and even that was sometimes abbreviated to just one letter: "N", but that has long-since gone.

There have been some attempts to produce standardised lists of knitting terms, such as the US Craft Yarn Council's List of Abbreviations, but still there are many variations in different books, magazines and individual patterns.

There are also international differences which just adds to the complexity. For example, I still can't get used to using the term "rep" for "repeat" instead of "rpt" which is the more usual form in the UK and Australia. I always feel like I should be doing an exercise routine when I see the numbers of "reps" I need to work in a pattern!

Still, the 3-letter "K2T" doesn't seem to have made the suggested lists, but perhaps I should be radical and sneak it into my next pattern...

Last Blogpost: Time to Kollaborate!
Next up: It's good to have options - Beckenham Scarf v2.0 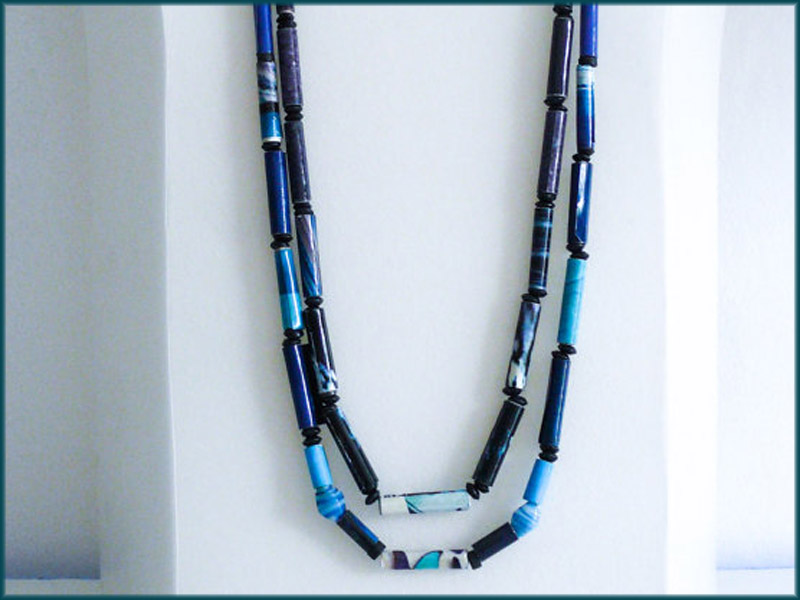 I try to wear something hand-made every day, even if it is just a pair of hand-knit socks or a super-cozy sweater. In recent times this has become considerably easier since our daughter Anna now has her own website, Kiku Knits. Now I can just add one of her brilliant hand-made items such as these lacquered paper necklaces to my outfit and I'm good to go!

Of course, this isn't an absolute rule but more in the nature of a guideline (can you tell we've been watching "Pirates of the Caribbean" recently?) However, I find that the day feels better when I have hand-made things around me. 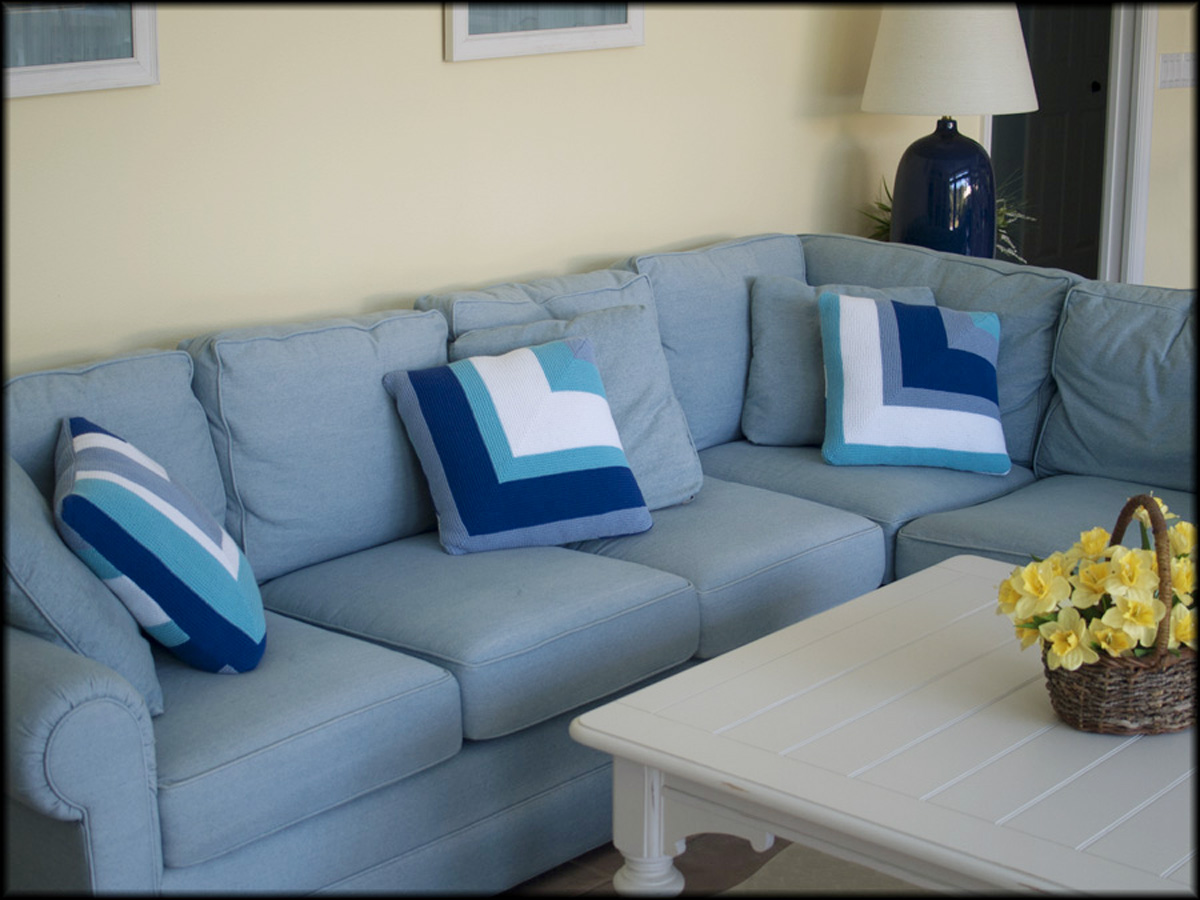 I love coming home to a house with knitted cushions, a hand-spun rug, or warm and fluffy woven blankets. Shopping seems more colourful with hand-knit bags to supplement the plain linen ones. Sweaters are so much warmer when they are made from 100% wool. 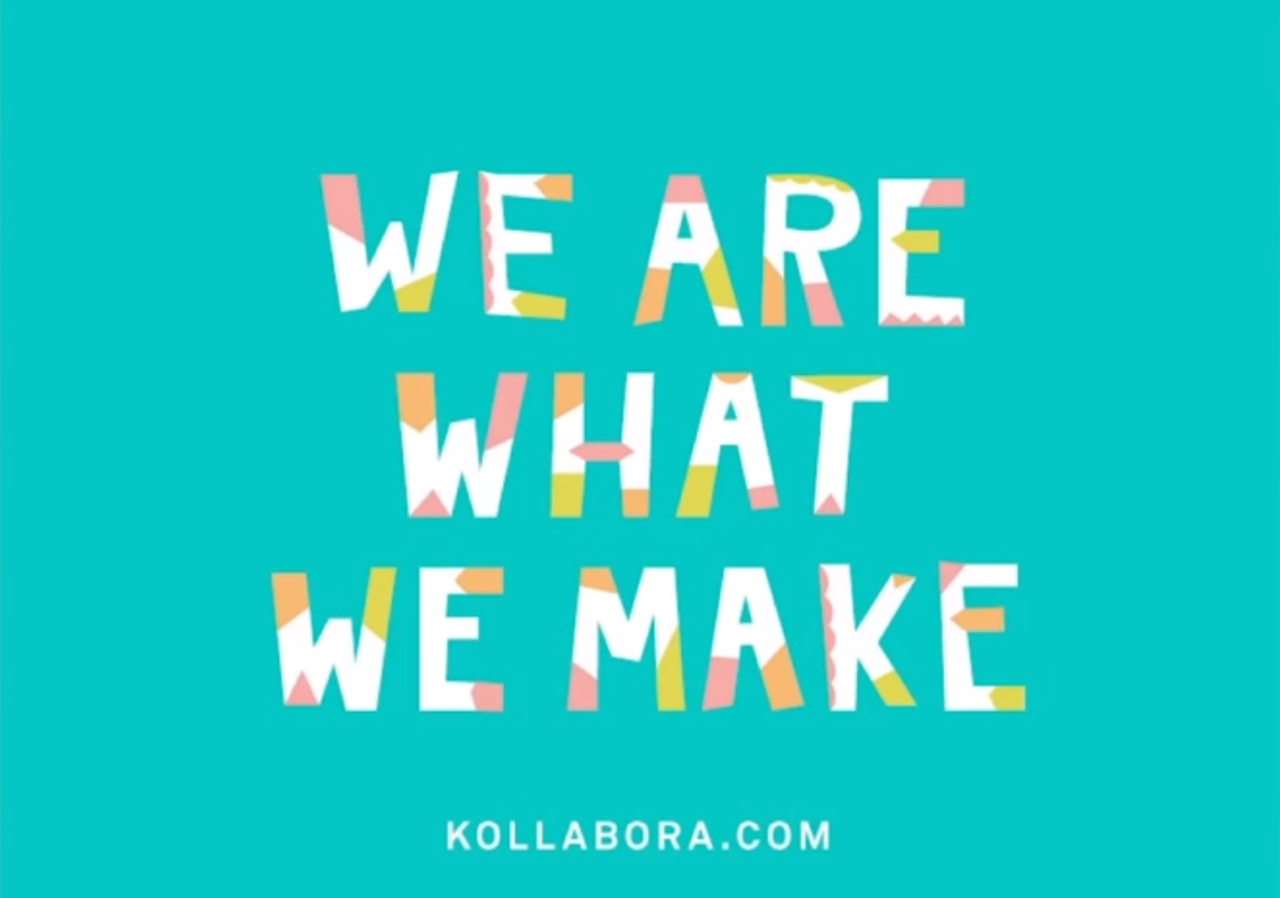 So I was especially pleased when I found Kollabora. The tag line for the site is "We are what we make" and that is the basic idea: to link makers, crafters and DIY enthusiasts so that they get inspired, share projects and connect with each other. And it's not just for knitters — the site is expanding to encompass many different crafts and techniques. They say their aim is to include everything from sewing to soldering!

The maker movement has been growing in strength in recent years, trying to provide an alternative to simply heading to the shops to buy everything. Making something from scratch or repurposing an item that would otherwise be cast-off and thrown away just feels like the right thing to do. 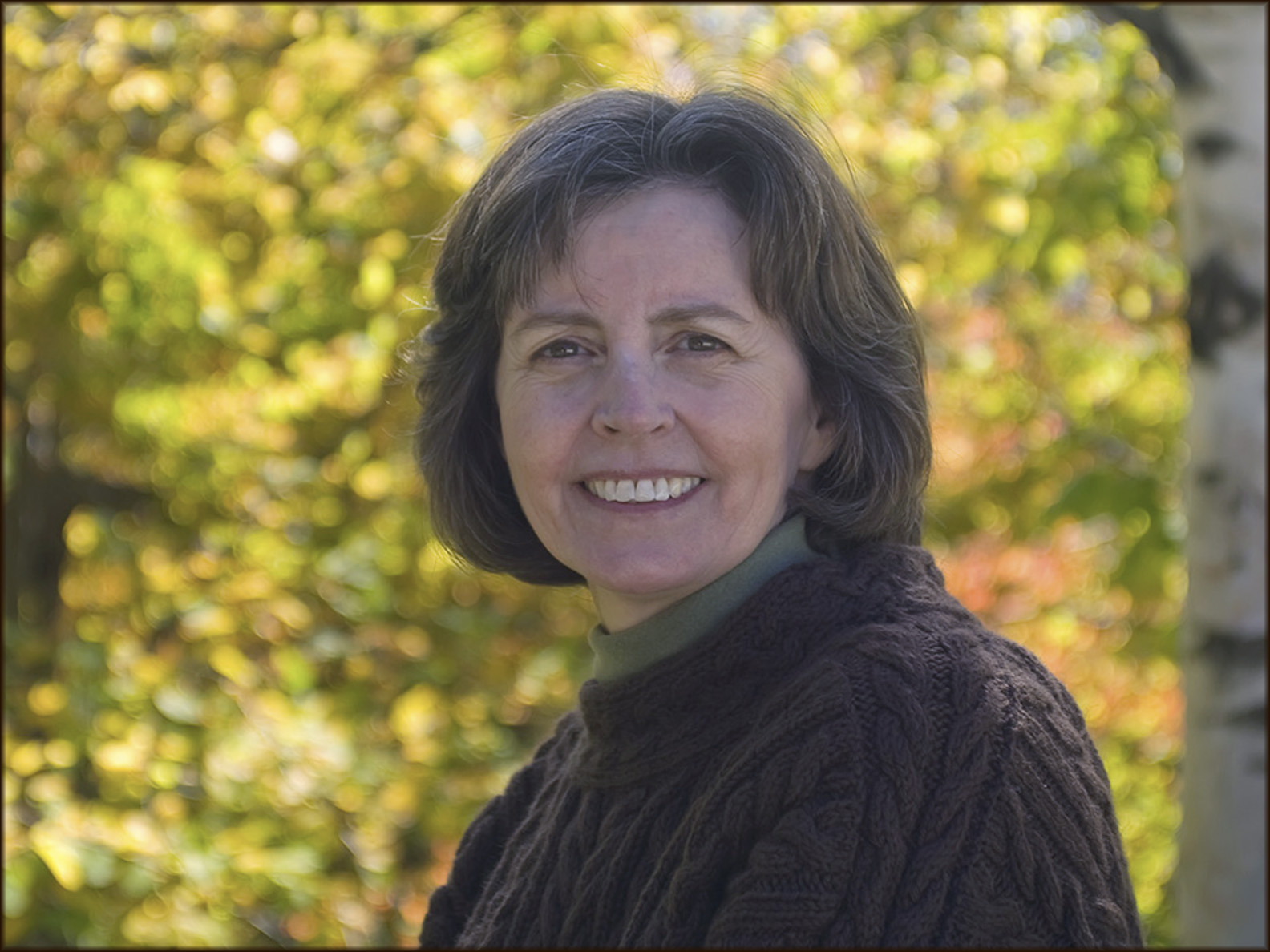 Not only is it good for the environment, but good for the soul too. Here's a quote from Kollabora: "If you have ever made anything, you know how good it feels: looking at it, wearing it, hearing others' praises for it. It becomes part of you. We are what we make."

Thanks, Kollabora, for helping me set up my pattern store on your great site — it's good to be part of your vision!